FAKE PRESIDENT PROPPED UP BY FAKE NEWS- What Difference Does It Make? Let's Look as Tax-Payers! 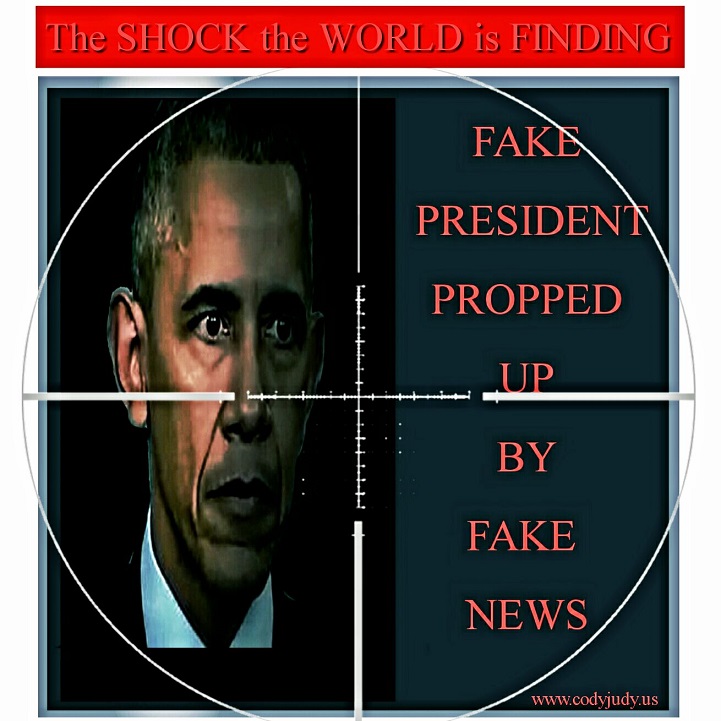 ~FAKE PRESIDENT PROPPED UP BY FAKE NEWS~
What Difference Does It Make?
WHAT ARE THE CONTINUED COST AMERICA WILL ENDURE?
What must We Ask Ourselves?
Let's Look as Tax-Payers


The fundamental question the Media is asking about the 2016 Election being upset by the Russians or Recounts seems oblivious or incomprehensible to them when Fraud and Forgery are fundamentally proven to upset the Elections of 2008 and 2012 giving rhyme and reason for the Public Distrust and accusation "Fake President Propped up by Fake News" amidst a Media Jubilee. This report will delve into exactly 'What Difference It Makes" in pursuing the Ineligibility of Obama even after Obama leaves office and why Trump if serious should move with the full force and weight of the all of America's Investigative and Prosecuting Powers with the FBI, CIA, and Attorney General's Office against Obama's Cover Up now shocking the World!

Journalists join together for panel on how to cover Trump

On report from The Hill Journalist are coming together in some sort of Media Jubilee to figure out out how to cover Trump. [The focus of the discussion will include "how journalists and media companies at large can play a bigger role in making sure that fact prevails over fiction in the coming months and years," according to Slate.] Will they start with Obama's Forgery and Fraud, or could they have had a bigger role? It was a massive Propaganda Role. 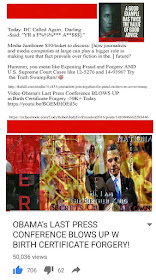 " I never started Taking A Stand for this Principle on the basis of Obama alone, (See Judy v. McCain ) its much bigger than out-going Obama, so to say it doesn't make a difference only exposes and exploits the sooth-sayer into an abyss of criminal keep-sake and cover up that is and has been and will yet be very costly. Republicans should be ashamed of the economical conservative faux pas or hypocrisy in this matter."


Cody reports harassment has gotten worse since Sheriff Joe's 3rd and final Press Conference with the Cold Case Posse revelations that debunked Obama's long form birth certificate as an Original. I don't pick my phone up now because of the nefarious and incendiary remarks coming out the other end from all over the United States of America.

Ever since a Video featuring the Exposure of the Fraud and Forgery of Obama's long form birth certificate in the Cold Case Posse's last Presser was mixed in with the deliberate and staged Media fawning of Obama in his last Press Conference, showing the Media's deliberately shielding Obama from the exposure of Fraud and Forgery in the Law Enforcement Investigation that was held just the previous day, and Cody's Video winding it's way up over 50,000 views, Cody says, "I just have to turn my phone off its such a nightmare."
OBAMA's LAST PRESS CONFERENCE BLOWS UP W BIRTH CERTIFICATE FORGERY!
https://www.youtube.com/watch?v=BGEMHOEil5c&t=44s

Cody reported it's not all bad with many supporting his Stand but even Republicans now he reports have begin to drift away from calculating the cost of "letting Obama go even as Hillary seems to have been let go with the usurpation of the Secretary of State Office in a Private Server un-overseen by the Public FOIA mechanism accountable to The People. The Great Usurpation of the U.S. Government un- prosecuted, and basically in tact, as walking talking violations of the U.S. Constitution has great consequences besides the High-Fives and Pats on the back for getting away with it. Let's look at a few things that Cody is talking about now.

WHAT ARE THE CONTINUED COST AMERICA WILL ENDURE?

Let's look at this in a progressively increasing consequential way. In other words the least expensive to the most expensive.

WHAT MUST WE ASK OURSELVES ?

I'm sure there is more such as the TRUST factor between the Media and the Public, but in here there is plenty. To all the above, our Elected Leaders, and even our President Elect we must ask :

What would possible refrain Trump from pursuit of Obama's Ineligibility if the Tax Payer and his own success is in mind?

For what has the TRUTH cost you? For what has the Truth Cost US? And to say, 'What does it matter in the face of lives lost, Obama has dropped over 50,000 Bombs in the last two years, amounting to 3 per hour every 24 hours, non-stop!  (That's embarrassing to a peaceful Record like President Jimmy Carter's who now we look upon in admiration of Peace - We didn't drop a bomb, we didn't fire a bullet )

What does it matter in the face of Economic Robbery of the Treasury? Obama's Administration has galloped through 10 Trillion Dollars of a now 20 Trillion Dollar National Debt more than from President Washington to President GWB. And what shall you say to America's Future Generations? "We doubled down! And We doubled Down Again!!! and Again!!! and Again!!! with no thought for you!!!" ?

One HEARING! Think of it? What SAVINGS?

Shall you now really be so embarrassed to pass these 8 POINTS on?

[I don't care what the Lower Courts said, the U.S. Supreme Court would not hear this Case because they knew they could not rule in Obama's personal favor. It would have just been impossible for them if I was up arguing it.

1- There is no way you can have a people who are Citizens of the U.S. Constitution before it was ratified. That ratification created a new LEGAL JURISDICTION of LAW with which to be born under:

2- That's the REASON that ART. II., Section 1, C-5 included two different Qualifications for President in Time: a- [CITIZEN] at the Time of the Adoption of this Constitution b. [NATURAL BORN CITIZEN] for those thereafter ie. Born in the U.S. to Citizen Parents

4- It is well said that the Constitution does not in fact say what a [natural born Citizen] is because there is no doubt that [born in the U.S. to Citizen Parents] clearly negates any Act or Determination by Adoption. There is no Judge in the United States who is going to say that anyone who is born in the U.S. to Citizen Parents is not a [natural born Citizen]. Get that? Zero!

6- The 14th Amendment when ever it was used in argument was and always has been a [naturalization] argument not a [natural born Citizen] argument. (for those who argue Wong Kim Ark changed anything)

7- Minor v. Happersett clear states there was never a doubt that those born of the Country to it's Citizens are themselves the [natural born Citizens] and to the others there have been doubts. That's U.S. Supreme Court precedent.

8- Congress men and women 8 times since 2003 tried to change the definition but those attempts failed in Congressional Votes. Ask yourself why? Why attempt to change anything on the [natural born Citizen] requirement for President if it always meant [Citizen] as the requirement for Representatives and Senators has been? And why was [Citizen] actually mentioned in the Constitution for those who were present at the time of the Adoption if they could have been [natural born Citizens] in the first place?]

The conclusion is no mystery if taught to elementary children. Why should it be a mystery for or to Congress or the Courts? It is both morally and financially the better road to take.

And to you who say Birthers were crazy, fringe, lunatics, fringe, delusional; how can you say now you appear to America's Tax Payers as such with such a simple measure that would have saved, will now save, and will yet save TRILLIONS of Dollars, and untold Lives?

And what has the Cost of Birthers been to you? Nothing but savings and civil peace. Our fight has been one that did not destroy property but is now one noticeable by a stand for TRUTH to be preserving property and our treasury. Our fight has been one that did not burn or set on fire, but sought to extinguish fire. As I think about the Birthers taking the pejorative on the chin, my heart swells in a Constitutional Gratitude and Thankfulness. I know our Founders would be proud of you.

America, to what have you credited the value of that? What amount has been paid by you to save our national Debt and the constant Obama carnage, that even the Media has coddled? Will you yet be silent to your U.S. Representative and your U.S.  Senators?

Yet, I may go away, but not with out a cry for my Countrymen, my sons and daughters, our Future in Freedom and Liberty. Yes, I will not go into the dark night silent or silenced, yet I will raise my voice, for I am one, and I am that I am. . even as God our Creator has made me. "That", I shall fulfill. "That", I shall satisfy- so help me God. 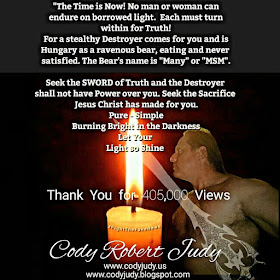