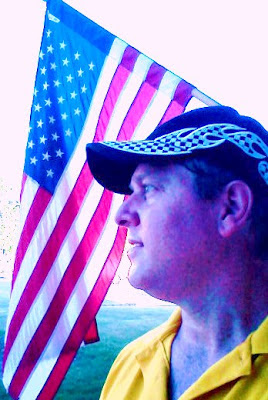 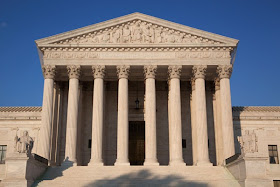 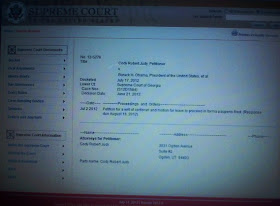 Arriving right on schedule the Supreme Court of the United States now has posted on the Docket Judy v. Obama et.al., # 12-5276 and Cody's campaign released this commercial today.
http://www.supremecourt.gov/Search.aspx?FileName=/docketfiles/12-5276.htm

"Canon shots echoing and ringing, this is a big day Baby!", Cody Robert Judy grinned. Along with Sheriff Joe's July 17th Press Conference which is starting right now ( March 17th,2012 5:30 EST) he probably has no idea that his first Press conference that was held March 1st, 2012 just hit the U.S. Supreme Court.

Sheriff Joe's Cold Case Posse introduced 2200 hours of investigation and evidence that the long form birth certificate and draft registration of Obama's had enough irregularities to substantuate "probably cause" of forgery. Lead investigator Michael Zulo led the 2200 hour investigation of the Cold Case Posse. Cody Robert Judy introduced all that evidence in the very first Judicial Court of the country; the Superior Court of Georgia March 2nd,2012 in Judy-Farrar v. Obama.

Undeterred by setback after setback, Cody has pressed on through the Georgia Supreme Court and today, March 17th,2012, has officially was entered in the United States Supreme Court in Judy v. Obama et. al., case number 12-5276.

We may never know the whole truth of this matter, but one thing we do know is that many Hillary supporters were among the first Birthers in the country apposed to McCain's good ole boy U.S. Senate resolution 511, which was non-binding and co-sponsored by Hillary and Barack in a Democrat controlled U.S. Senate. Many concluded that the main reasons the Republicans in office have not objected to Obama's eligibility was because of the resolution that was the second act McCain needed to sustain first his Citizenship given by an Act of Congress 11 months after his birth , and then his Natural Born Citizenship before the nomination.

Left to fend for themselves were the American public who had thought that they had sent their representatives to Washington DC under a pledge to uphold the U.S. Constitution and many filed suits against Obama in angry protest wondering what was wrong with their Representatives. Anti-Birthers have glutted on a series of wins due to the dismissals of nearly all of the law suits because of 'standing' or 'jurisdiction'.

One of the more prominent law suits known as Keyes-Barnett v. Obama finally reached the 9th Circuit Court of Appeal in 2011 and the Judges there concluded that out of over 100 petitioners , only the Presidential Candidates actually had 'standing' and met the requirements, however, they concluded that since the election was over and the candidates were no longer running, their standing had expired.

Cody Robert Judy first challenged McCain as a write-in candidate in 2008 opting to clean house on the Conservative end of things, but also ended up after Obama had become the nominee in the Democratic Party including Obama. The Judge delayed his rulings defying precedent and court rules in favor of waiting the election out, where he then made a ruling in Judy v. McCain that the action was 'moot' because McCain had lost the election.

In 2010 Cody Robert Judy gained recognition in New York as a 2008 Presidential Candidate witnessing against Obama. As candidate in 2008 witness, objecting to McCain and Obama's eligibility and highlighting the deal that had been struck with the Obama / Hillary co-sponsored Sen. Res. 511 for McCain in the CIA Columbia Obama Sedition and Treason Trial, his testimony gave the 10th Amendment Jury of Citizens from across the United States, the Standing and witness of injury caused by Obama's Declaration of Candidacy wherein Obama swore under oath he was a 'natural born citizen', and the Jury found Obama guilty of 'sedition' and many other charges of fraud.

One week before Republican Candidate and Texas Governor Rick Perry entered the presidential race, Cody Robert Judy filed papers with the FEC and entered the race on the Democratic Party side and began his actions against Obama's eligibility by first challenging Obama in a Ballot Challenge in New Hampshire before the early primary, which was also appealed clear up to the New Hampshire Supreme Court.

Georgia was the second state and Cody's appeal today recognized by the United States Supreme Court makes the sixth Court this year Cody has trudged through with determination and courage. While it has been a long road, it has been made with surprising speed and now, before the Justices of the highest Court, is in position that the Justices could find it hard to dismiss on grounds of "Standing" or "Jurisdiction" owing to Cody's campaign for president within the Democratic Party challenging Obama's eligibility.

One of the most important things is the ruling made in the Geogia Ballot Hearing on the natural born citizen issue by the Administrative law judge, believed to be the first of any kind of such opinion, which basically nullified the qualifications for the President as a natural born citizen in the U.S.C and delegated that to the 14th Amendment's interpretation of a naturalized "Citizen" that might include foreign allegiances.

Because of the Democratic Party National Convention being held in Charlotte, North Carolina Sept. 5th,2012, Cody has asked the Court to consider a "special session", convening its recessed state, based on a motion and order found here: http://www.scribd.com/doc/100222989/Judy-v-Obama-SCOTUS-Motion-Order-Why-did-Mitt-Romney-become-a-Birther implicating the danger the Democratic Party could find itself in if Mitt Romney chose, after his nomination, to challenge Obama's eligibility leaving the Democratic Party unable to recover before the November 2012 election.

The Petition for Writ of Cert is found here: http://www.scribd.com/doc/100156244/Judy-v-Obama-Petition-for-Writ-of-Certiorari-Revision-per-U-S-Clerk-Case-Analyst-Appendix-Stamped-Orders-Included

This is not Cody Robert Judy's first rodeo in politics as he ran in '02 for U.S. Congress, twice for the U.S. Senate in 04 and '10, and as was previously mentioned for President in '08. Cody is also a published author releasing Taking A Stand-The Conservative Independent Voice in 2008 as a prelude to his presidential run. Cody's conservative 3 Point Platform can be found on this link at his web site: http://www.codyjudy.us/cody%20robert%20judy%204%20pres%202012%203%20ropes%20platform.htm

Stay tuned into Cody's blog for futher press releases and updates. Contributions to Cody's campaign can be made here: http://www.codyjudy.us/codyrobertjudyforpresident2012_011.htm