Why are Anti-Birthers freaking out about Qualifications for Office in the Constitution?

For the last 8 years I have wondered almost with an astonishment why "Anti-Birthers", those people who consider it an insult to ask for a politician to at least qualify for the office they are running for per demand of the Constitution, that defines for us the minimum standards for the Offices in our Government.
For that reason I wanted to create in as simple a format as possible, in less then 2 minutes, a video that defined for the simple minded person what exactly our Constitution demanded from candidates running for office as a bare minimum, and explain the reasons for such if I could.
http://www.youtube.com/watch?v=ITCr420K4i8

My first experience with this was seeing Sen. John McCain's picture on the front of TIME MAGAZINE with the title of "HONOR" underneath it. As I read the article which trotted out Sen. McCain's interest in the presidential nomination of the Republican party in 2008 I suddenly felt a sick feeling in the pit of my stomach as I realized what the implications were in someone getting into the office of the president who was not a natural born citizen.
http://www.time.com/time/magazine/article/0,9171,1837246,00.html


McCain was not a 'natural born citizen' in my mind as he was born in Panama. That would forever be his beginning and natural state of affinity. It was in the panama hospital and I read an in-depth study which proffered McCain was born 1100 yards short and 11 months late and it was an Act of Congress that gave McCain citizenship, which absolutely defies nature giving it to him. I decided to act on my gut and 3 days before McCain was made the nominee I served the National Republican Committee and 2McCain a Federal District law suit I hoped would be a reminder of Honor.
1 http://papers.ssrn.com/sol3/papers.cfm?abstract_id=1157621
2http://www.scribd.com/doc/22288917/Judy-v-Obama

We have constantly heard that if Barack Obama was not born in Hawaii he could not be president. I don't know how many times I've heard that, but at that time I had not even heard of him. Many Hillary Clinton democrats were on board and the media looked to be scrutinizing McCain pretty good. I felt I certainly had a cause the party I had run for office in was behind. That was until U.S. Sen. Resolution 511 happened which was the second Act of Government trying to supersede 'nature' in handing McCain deferred status as a 'natural born citizen'.
http://www.govtrack.us/congress/bills/110/sres511/text

I had run as a Democrat for office before, in Utah's 1st Congressional District for Representative in 2002 and for U.S. Senate in 2004 on my own first hand experience of seeing the Constitution tossed out the window by Republicans in criminal court evidence demands and a union of church and state, but looking back now, even then, I did not understand the full significance of what could possibly happen if our Constitution came to its own demise with the wanton disrespect of those actually in the offices it defined.

To me it was as simple as just reading the definitions for the offices of Representative Senator, and President in the Constitution however many people have not done that and don't carry a pocket Constitution with them. There have been reports that Obama actually won with the most dumbed down class of people voting America has ever produced in United States history, which may very well have been rooted in the Republican party. If your not teaching the principles of the Constitution with your party, with your candidates it probably should come as no surprise that its true. If conservatism knew the Constitution, and simply stood by the demands of the offices laid out cleanly in the Constitution, there's no way Obama could withstand major players in the Republican party going into court demanding judgement.
http://www.huffingtonpost.com/2012/11/13/bobby-jindal-gop_n_2121511.html

As a kid in school I had so much faith in our Government I never gave it a second thought. I mean the Constitution wasn't some monstrous 2,700 page report we had to read in 2 weeks before voting and passing it in Congress like Obamacare was. I'll always remember Rep. Nancy Pelosi saying "we have to pass this so we can find out what's in it." I mean..what? Is there anyone out there who thinks we might be in trouble when a speaker of the House, the leader, comes out and says that?
http://blog.sfgate.com/djsaunders/2012/10/11/nancy-pelosi-says-she-read-obamacare-bill/

I also begin to sense we were in real trouble when I learned that Congress, both the House and the Senate, when they had a Constitutional question, were relying on the Congressional Research Service more than their own pocket constitutions for which I featured in 2 videos, because the information delivered to Congressmen basically manipulated the 'natural born citizen' term out of rulings and replaced it with 'Citizen'. The tell all tale of that was when I received multiple letters from my own elected Congressmen stating in slapped down terms there was not an issue with someone who had produced a forged and fabricated birth certificate, that if taken as genuine would still deny him eligibility for the office of President, as Barack Obama.

This ultimately led me to running for President in 2012 also and taking this information as well as the results of over 2600 hours of law enforcement investigation to the United States Supreme Court in Judy v. Obama 12-5276. It is unfortunate to learn first hand that just because your right doesn't always mean your going to win. Things can happen that shift the momentum away from you, just ask the Baltimore Ravens who nearly had their Superbowl victory taken when the lights went out in the Superbowl in a 35 minute delay.

I congratulate the Baltimore Ravens in their world champion Superbowl victory, but they would understand entirely what I'm talking about if that victory had been taken by the San Francisco 49's. The point is that there are so many factors that can come into play that its almost entirely impossible to predict which way the wind is going to blow and getting to the United States Supreme Court, no small task in and of itself, does not mean they will give you the time of day of which thus far I have well understood.

We like to think and believe we are living in a Nation that advocates Justice for all, fairness, and living under the same rules, but it is far from perfect. The lack of perfections are advocated by those in authority as slips in the cracks that are regrettable; but it really sucks when you're one of the pieces of debris that has slipped through the cracks. 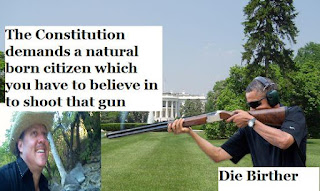 Education is sincerely one of the best defenses for our Country. I made it a central theme in my 2010 U.S. Senate run to memorize the Amendments and deliver those on YouTube for elementary, junior high, high school, even college classes. I am convinced that to make a more perfect union we must arm ourselves with education of the founding documents of our Country. This video features in very plain language fundamentally to our advantage which is, I believe, is divinely inspired, the forethought of the problems we face now on the qualifications of the President.

With the most basic rudimentary powers of deduction we can assimilate the facts that "Natural Born Citizen" is indeed something greater in criteria then being a "Citizen", which was indeed mentioned three times in the qualifications for Representative, Senator, and President, but that was intended for the office of the President ONLY for those living prior to the Constitution being signed. For all those born after the Constitution was signed the term "Citizen" no longer applied and it was indeed intended to protect our Country by the natural determination of two generations.

Because the President of the executive branch is the commander-in-chief of our military, it was thought to be a good idea that the extra stringent protections of our national security not be given to anyone but a "Natural Born Citizen". By deductive reasoning and by Supreme Court precedent we know there have never been any doubts to those who were "Born in the U.S. to Citizen parents" as to fulfilling that criteria.

If the economic fact that Obama has spent more money then all the Presidents combined from Washington to Bush, spending our future into oblivion is not an astounding alarm to you, I have very little hope for you to recognize trouble before its too late. If my experience has taught me anything it is that when you are in a jail cell or a prison cell with armed guards around you, with no ability to procure defense, by then its too late.

If you ever thought you might have to believe in God as slaves in America just like the Israelites did under the edicts of Pharaoh Ramsey of the Egyptians and have God very slow to hear your cry, you might have an idea of what you may have to go through by not heeding the Constitution and its gift to you purchased by the blood of those who fought America's Revolution.

It is my very humble prayer not to see you in the bonds of those prison camps of the Red Dawn where everything is perceived as normal, but everything is far from normal. We have inherited our freedom but we must constantly fight for it. I think what's even more disturbing watching her review, is that the young generation seems to feel inoculated from being thrown into the 9 digital era.
http://www.youtube.com/watch?v=35PZRStpv8o

Its real life: the lack of concern for our Constitution and thus our freedom and liberty by a generation that has indeed had their freedom handed to them on a silver platter. If coddling or favoring China's market over Human Rights isn't the biggest sign to you that communism is something our freedom and liberty should fear I don't know what would be.

Please enjoy and share the video "A Constitution Reckoning"

Posted by Cody Robert Judy at 9:07 PM No comments:


A Constitutional Reckoning recites the qualifications for office of Representatives and Senators and the President pointing out and highlighting the difference demanded in the Office of the President for a natural born citizen. Is Obama above the law? If he is and the Constitution is not the standard for everyone there's a whole lot of people in prison who should be released.

Posted by Cody Robert Judy at 12:22 AM No comments: