Conservative's Cave on Principle - Did Conservative Radio Ever Really Have Any?

As also Featured Editorial on The Post & Email
Here: http://www.thepostemail.com/2013/07/02/conservatives-cave-on-principle-did-conservative-radio-ever-really-have-any/

What can we say about the Amnesty dialogue happening now in the debate across America? Wasn't it amazing to hear Rush Limbaugh -the conservative talk show host and national treasure of America say to a women calling in expressing her desire to accommodate low information voters and ascent to Amnesty for the points that Marco Rubio would get and thus the Republican Party?

Its difficult for me to contain my lunch with the conundrums heard this morning as she played devil advocate to Rush a little while Rush maintained the sluggish high ground of "PRINCIPLE" over politics maintaining that Amnesty should be opposed. Of course "points" to Rubio though not articulated may have had reference to his running for President in 2016 also for which he is not qualified by the demands of the natural born citizen qualification for the Office of the President.

Wow! Can we just take a little trip down memory lane and say that if "principle" has been maintained by Rush- 66 Million , Glenn 90 Million, and Sean 30 Million , three people listed in Forbes 100 Magazine as top earners in 2012, Obama would not be in office. What does it profit a man to gain the whole world and lose his own soul? I imagine we'll find out.

If they conservative legends of America, actually maintained, understood, perhaps acknowledged Obama's long form birth certificate and draft registration pose the biggest crisis at the root of Obamacare and Amnesty this Nation has ever seen? Maybe then they would have a point on principle?

Of course then they would have really been fighting the fight and been on the front line taking the hits, shoveling the Birther Mire as it caved in on them, digging in, and maintained the moral high ground of our Constitution.

Today I had an interesting thought about Jesus Christ to share. Its been in my mind for awhile but I don't think I've written about it on my blog before, however, it is relevant I believe in the crisis of our Country at this time in severe trauma. The interesting thought had to do with Jesus drawing on the ground in John 8:8. Of course much has been written about this.

John 8:6-8
This they said, testing Him, that they might have something of which to accuse Him. But Jesus stooped down and wrote on the ground with His finger, as though He did not hear. So when they continued asking Him, He raised Himself up and said to them, "He who is without sin among you, let him throw a stone at her first." And again He stooped down and wrote on the ground.

Some believe that this was foretold by Jeremiah the Prophet.

Jer 17:13
O LORD, the hope of Israel, All who forsake You shall be ashamed. "Those who depart from Me Shall be written in the earth, Because they have forsaken the LORD, The fountain of living waters."

Multitudes of sermons have been preached concerning what it was that Jesus wrote there that caused the scribes and Pharisees who brought to Him the woman caught in adultery, to drop their stones that they were about to stone her with, and back off. Many believe that Jesus was making a list of the names of the men that had used this woman, and that all of their names were on the list.
John 8:8 And again, he stooped down and wrote on the ground.
John 8:9
Then those who heard it, being convicted by their conscience, went out one by one, beginning with the oldest even to the last. And Jesus was left alone, and the woman standing in the midst.

I hope that you also noticed that the woman that was caught in the very act of adultery was Mary Magdalene. Many believe that this is the same Mary that is the sister of Martha and Lazarus.

Jesus drew a line in the sand here. In the world in which they lived, people could either follow Him or be "of the world". There could be no straddling of this line... it was either one side or the other. Ultimately the crowd dispersed seeing they could not accuse her being in need of forgiveness themselves as Jesus spoke, he who is without sin let him cast the first stone.

Well, Obama's eligibility was in my mind that line in the sand. It was the point that if crossed would mean an infiltration by usurpation within the very Executive Branch of our Government that is the Enforcement of Law. It is I don't mince words the "Key" to the Constitution, your civil rights, our freedoms and liberties, and in essence the integrity of The Republic for which we Stand.

Now all the Conservative Radio Talk Show host Obama is making millions for have literally profited millions of dollars opposing Obama. Now if opposing Obama was such a lucrative thing to do why have all the Presidential Candidates who opposed Obama's eligibility been so stricken with poverty and so very few contributions?

Now ask yourself where in the line in the sand, on which side when it comes to the eligibility of Barack Obama/Barry Soetoro, is Rush Limbaugh, Glenn Beck, and Sean Hannity?

Believe me, its a very short walk from being a paid opposition to being an accomplis, especially when you understand that identity fraud, fake identity papers, fraudulent representation is punished severely upon American Citizens, and all but forgotten when it comes to illegals.

Obama's fraud and forgery are all but forgotten by the Conservative Radio Show Host? Why? Don't want to disturb their gravy train or blame Obama for pointing the gun at their heads? Which one makes a little more sense?

This Amnesty Charade has done what for the IRS Scandal, The Benghazi Scandal, The Verizon Wireless Scandal, The A.P. Reporter Wire Tapping Scandal,and of course the greatest scandal underneath Obamacare and Amnesty being the Ineligibility of Barack Obama for the Office of the President?

Its swept them under the carpet and taken America's eye off of being spied on and treated like criminals. While Egypt hangs signs in the square declaring Obama is supporting terrorist and arming The Muslim Brotherhood and Al Qaeda , we here in America are worried about the integrity of our law whilst Obama has violated the very heart of our Constitution as an ineligible candidate for the Office of the White House.

As for my part in drawing a line from which I would not withdraw or concede, it is on the United States Supreme Court record I as a candidate filed in Judy v. Obama 12-5276 also including the 2500 hour investigation of Mike Zullo assigned lead investigator for the Sheriff Joe Arpaio Cold Case Posse investigation concluding Obama's long form birth certificate and his selective service registration were both altered and thus frauds upon the American Public January of 2013.

Now I don't know if any real United States Court Justice ever laid eyes on my complaint or if based on the absurdly crazy way in which clerks of the Court handled it-finally giving it a case number only after 3 others were filed from Georgia none of which had Presidential Candidates attached to them which may have provided the unsavory cover of justice they sought, but I know Congress has a responsibility to draw a line in the sand when it comes to our Constitution and that Congress is designed to be a check and balance to the Judicial Branch and the Executive Branch of which up to this point they have in all reality dropped the ball on forsaking their oaths.

God Bless men and women who do get to Washington DC and have the courage to vote "no" when it comes to adhering to their oaths to the Republic's Constitution or Supreme Law of the Land, wither or not things get done or not. I actually imagine an Administration where success would be "nothing".

As President I actually would consider it a compliment where there was no law passed in my name etched in the history books. I would actually feel it a great honor to simply stand with our Framers and Founders in defense of the Supreme Law of the Land they also sacrificed and so many of our Soldiers have bled for.

Let it not be said on deaf ears that America is not a land flowing with milk and honey to be pilfered and squandered. This is not a land of fairness when it comes to handouts of cash and entitlements you "think" you deserve. Let it be better remembered that this land is a land of opportunity and those coming legally may embark on a journey of work that may produce the milk and honey but that sitting around collecting checks every month isn't part of the opportunity or equation people coming to America seek. Those socialist nations are better and more fertile ground for those wanting such accommodations absent our elderly and crippled.

For those seeking such I say neither Democrats or Republicans will ever get this message until you elect an Independent President. Until you put your trust in the principles of this Nation that both those parties are and have forsaken. Only you can indeed make a difference by recognizing the voting I for Independence is as important today as it was in our Independence Revolution. 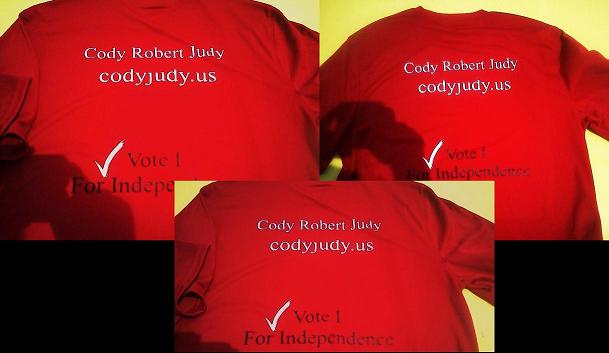 It is incumbent upon you, and not Washington DC to protect, preserve, and defend the Constitution by electing those who will serve you and an Independent Party for this Nation is needed now. All independents coming together under a banner of Independence united in the unique and unadulterated platform of our Constitution that has successfully provided for the success and protections the world now seeks to destroy and has ever sought to destroy.

If the world does not want America as a friend we need no friends. If Rush and Glenn and Sean don't want to righteously judge Obama as not qualified by the Constitution's demands as a natural born citizen,they are more interested in the all mighty dollar and getting what they think they got coming over and above preserving the integrity of our Supreme law.

Please, help me by passing this along to your social media networks and contribute to this effort here if you consider these truths to be self evident.

Posted by Cody Robert Judy at 2:55 PM No comments: Links to this post