HILLARY'S AMERICA... ?- CRJ REVIEW - I'm not quite sure about that 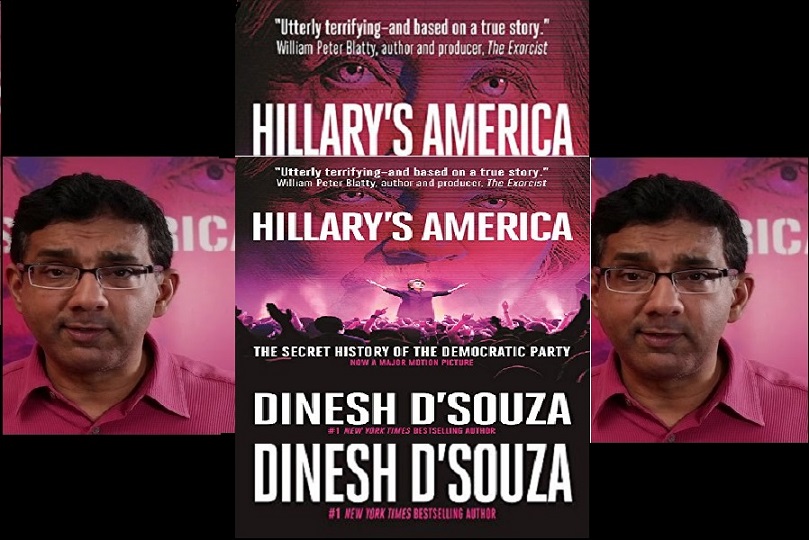 
REVIEW HILLARY'S AMERICA Dinesh D'Souza I rented Hillary's America and watched it last night. My biggest disappointment of the Movie came in your statement " Because of my conviction I can't Vote but you can" 1 in 5 Americans are incarcerated on parole, or probation and if you are [not currently incarcerated] your Vote is protected by the 15 Amendment.

A record number of U.S. citizens — nearly 6 million — will sit out the upcoming presidential election because they are incarcerated, on parole or probation, or are ex-felons.

It appeared to me throughout the Movie that Dinesh D' Souza simply bought the smoke both Democrats and Republicans have been selling rather than standing up and reading the Constitution. One would think now he is "one" of those who has been labeled with a past criminal record he would be taking a deeper look into the actual Supreme Law of the Land?

VIDEO should cost HILLARY CLINTON the Black Vote- they must be brought to heel
https://www.youtube.com/watch?v=8k4nmRZx9nc

Some "States" and "Municipal" elections don't allow "Voting" By those incarcerated because the total Prison Vote could sway the entire Election, but not so much in Federal Elections.

Utah Law used to allow even those incarcerated to file an absentee ballot. While we responded in opposition to that being overturned, much because LDS Church Officials are not incarcerated based on Polygamy anymore, it only applied to State Elections.

http://archive.sltrib.com/story.php?ref=/sltrib/news/54971709-78/criminal-election-felons-inmates.html.csp
With such a powerful voice as the one heard I sighed in regret for you making this statement without any clarification as it may have disenfranchised near 1/5th of Americans.

That we know CAN influence a Federal Election. With the "3 Strikes Law and you're out" President Bill Clinton signed, I was very surprised to see you not mention this as a disenfranchisement of so many Americans attributed to the population of the new "Plantation" of Democrats. (?)

http://www.thedailybeast.com/articles/2016/04/09/bill-clinton-s-ugly-defense-of-his-crime-bill-that-harmed-black-communities.html
It was as if you missed the entire Modern Day Clinton "round up"! 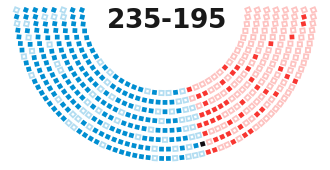 The application of the Constitution is only successful when those needing fail to take a stand for it. VOTE - you have that right if you are not currently incarcerated. Thank you for your talents as an awesome Story Teller and Movie Maker. Cheers to the Next one!

One of the reasons I have been either a registered Independent or Democrat has been based on "inclusion" and the enfranchisement offered to all American Citizens under the U.S. Constitution. Throughout my post-conviction life, I mostly have not been rewarded too favorably by Republicans, maybe some based on my law suit against Sen. John McCain for not being born under U.S. Constitution Jurisdiction of a State of the Union maybe some from Republicans who were Mormons offended at my offense in the Religious Meeting or Fireside. The length of my sentence seemed more poison from the Republican Party as a Majority during my Time Incarcerated.

I can't say Democrats have been thrilled with me as the only Election I have ever won was the one the Utah Democratic Party lost trying to prohibit me from Running in the Democratic Party in 2002 as they failed to get over the 90% of the vote from those voting. Interestingly enough it was those in Society who often received the worst discrimination themselves who cast enough votes to derail the Utah Democratic Party shenanigan to not allow me to run in the Democratic Party and I will always be grateful to those who stood up for the Constitution with an interest of Individual Liberty and Justice for all in the LGBT and Minority Caucuses and Communities. It could also be that I have protested the fairness and equality of the Constitution's Parameters of Qualification in the Office of President against Barack Obama clear to the U.S. Supreme Court twice 12-5276 & 14-9396.

There is some truth to the horror of being disenfranchised from the Constitution by the very people who profess to stand up for it. , even after the penalties have been paid Society said was fair. I count that discrimination as a horror to our Republic and demeaning of even the spirit of our Country wherein those framers and founders where all considered Felons by England and if we would like to go back further Jesus Christ was considered a malefactor (felon) worthy of the death penalty by those who considered themselves Church Leaders.

John 18:30 They answered and said unto him, If he were not a malefactor, we would not have delivered him up unto thee.

For those who did not get the chance to read the Document I FAXed and Mailed to Representative Jason Chaffetz Chairmen of the House oversight and Government Reform Committee I will include a link here and also include the Live Link Reading I did on Facebook Yesterday below:

HEARING REQUESTED BY FAX LTR TO CHAIR OF THE COMMITTEE

Document
Hearing Request and Report to:
Jason Chaffetz- Chairman of the Committee on Oversite and Government Reform 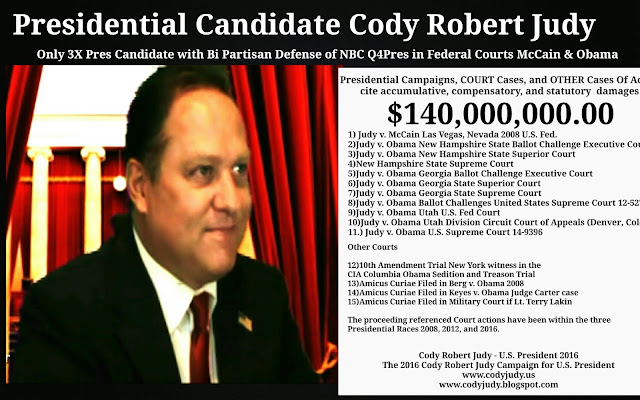 Posted by Cody Robert Judy at 11:48 AM No comments: 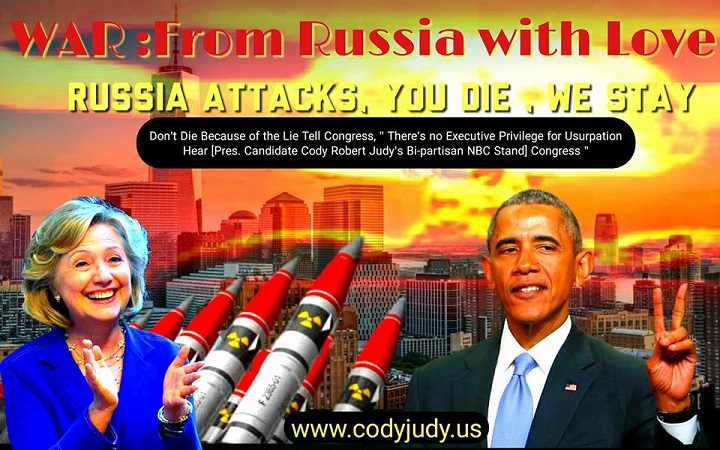 -------
THE DEFECTO STATE OF WAR -TIME TO PREPARE IF YOU Die IT'S BECAUSE OF THE Lie. OBAMA'S FINGER TWITCHING FOR NUKE BUTTON MAY PREVOKE RUSSIA's Pre-emptive STRIKE
------

RESULTS OF USURPATION AS SECRETARY OF STATE OFFICE
----------
HEARING REQUEST TO THE COMMITTEE ON OVERSITE AND GOVERNMENT REFORM
Hearing Request on Facts an Evidences Re:
a) Qualification of Barack Obama - Considering Executive Privilege and Constitutional Qualification of [natural born Citizen] for Office of the President
b) Consideration of FOIA and in regards to CRJ's #SCOTUS Case Numbers 12-5276 & 14-9396 dismissal for Forma Pauperis discrimination effecting Justice for All-especially the poor
c)Constitutional Qualification in consideration of Hillary Rodham Clinton without Amendment regarding Article I, Section 7 and Article II emphasis on authorization of "He" without the express term Person or "She" under principle of the sexes and authorization under the Constitution.

THE DEFACTO STATE OF WAR OBAMA HAS LEAD THE U.S.A INTO

DEFACTO WAR W Russia has been Declared by OBAMA! The goal: Provoking the Bear to attack you before the Election. They say true progressives are never truly happy, but they are a little relieved when people are being killed.

14 Minutes here, I don't care if you hate Alex Jones. You are not going to see the consortium of Facts put together in a collection of Truth you need to Prepare for that is rapidly developing now than this 14 Minutes.


While Russia just had 40 Million People find their nearest Nuke Bunker what has the News told you?

Listen to these Facts- if we make it to the Election, Hillary Clinton is not the Person we need there unless you want to die in a Nuclear War then by all means vote for her.

And please take Notice of her prodding Russia constantly for a First Strike that excuses her. .. sort of. It's not about Hillary, it's about Obama, his usurpation Covered up by Government and Mainstream Media and the threat of uncovering the Lies.

WORDS CANNOT EXPRESS the USURPATION of Justice, between Obama's Hooks and Goodies and the FBI. BREAKING NEWS NOTICE Patrick Kennedy ( pictured in comments section) was one of the State Department's Main actors in the Hillary Clinton Server Scandal. Now we learn via WikiLeaks this same Patrick Kennedy was orchestrating a Quid Pro Quo to the FBI offering from Obama more positions in foreign countries. Humm thought that was CIA work? Yes FBI Domestic CIA Foreign.. so The FBI has Dreams of expanding operations and is using the leverage to get what they want by compromising Justice? Here is that Report from FOX's Catherine Herridge with the White House Secretary Response Below it.

WOW! HILLARY Campaign /Dems USING RUSSIA AGAINST TRUMP WHILE HOLDING STOCK in a quid pro quo? Hillary Clinton campaign chairman John Podesta received intelligence that Barack Obama was the beneficiary of voter fraud in his primary run against Clinton, according to Wikileaks’ dump of Podesta’s emails in 2008 - Now Podesta revelations out of WIKILEAKS are linking Podesta to Putin-connected companies found in the hacked email exchanges the same time Podesta claims Russian spies hacked his email to influence the presidential election.


RESULTS OF THE USURPATION OF THE OFFICE OF PRESIDENT

by assault of the [Natural Born Citizen ie. Born in the U.S. to Citizen Parents] I told you the Story in this Picture on my Blog months ago June 29th link at the bottom. 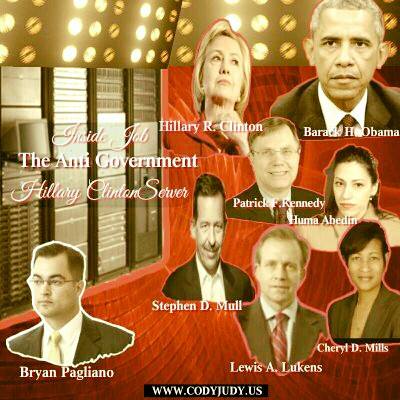 [ clearly, the president was lying to the American people: He knew he personally had engaged in several e-mails with Clinton. By extension, Obama was also lying to the Congress]

Obama's Recommend by implicit and direct communication took the Secretary of State Office underground with him in a usurpation away from FOIA in the greatest act of treason the United States has witnessed in our 240 year history!


TREASON! In Government Offices committing Crimes against the People with smiles on their faces and you are worried about what Trump said 11 years ago NBC sat on for years.


HEARING REQUESTED BY FAX LTR TO CHAIR OF THE COMMITTEE

ON OVERSIGHT AND GOVERNMENT REFORM


Document
Hearing Request and Report to:
Jason Chaffetz- Chairman of the Committee on Oversite and Government Reform

Posted by Cody Robert Judy at 4:30 PM No comments: