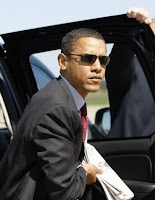 The Democrat Party has only one chance in a million to survive not just a simple crash, bump and run, or fender bender, but realistically putting it gingerly, facing utter extinction from the American Politics.

Their ram rod, shape-shifting, nonfeasance, or failure to act in derogation of a duty to do so, towards the Constitution in a Senate Trial on Obama’s eligibility and into, as Parada put it, “The snake pit he ,‘Obama’, has dug himself, is RUNNNNNNN! Abandon Ship!, leave the corpse to rot, let the dead bury the dead and get the hell out of the snake pit!

If any semblance of dignity, or honor, or respect is going to be left in the Democrat Party, it has got to challenge its own mouth biting its tail, chewing away, and with every passing day pumping life threatening venom into the course of its body as fast as the foreign made oil spill in the gulf is pumping oil into the ocean blue destroying everything in sight.

http://english.pravda.ru/world/americas/113977-1/
"Does Obama have any chances to be reelected? If not, who can become his successor? Pavel Zolotarev, deputy director of the Institute for the USA and Canada, said in an interview with Pravda.Ru that Obama and Democrats on the whole find themselves in a difficult situation at present moment.

“I believe that the administration of the Democratic Party will nominate another candidacy for its own rescue. The political system of the United States is very conservative, which gives the nation a very good protection in critical situations. This is the main reason why the Americans do not want to see Obama in the White House anymore.

Excuse me? How about he isn’t qualified, never was qualified, isn’t about to be qualified in this life time, and is simply an occupier of the White House as a Fraud of any honor towards the United States Constitution and its qualifications of an honorable American President and natural born citizen, and the Democrat Party is the slime of oil in the gulf right now making us all sick with any kind of loyalty to this bastard occupying usurper.

Get it straight we got more pride in America then not to clean our own White House up if the Democrat United States Senators don’t clean it up first. You can put money on that promise.