Republicans Continue to Lose in the U.S. Senate with Lack of Will for the U.S. Constitution 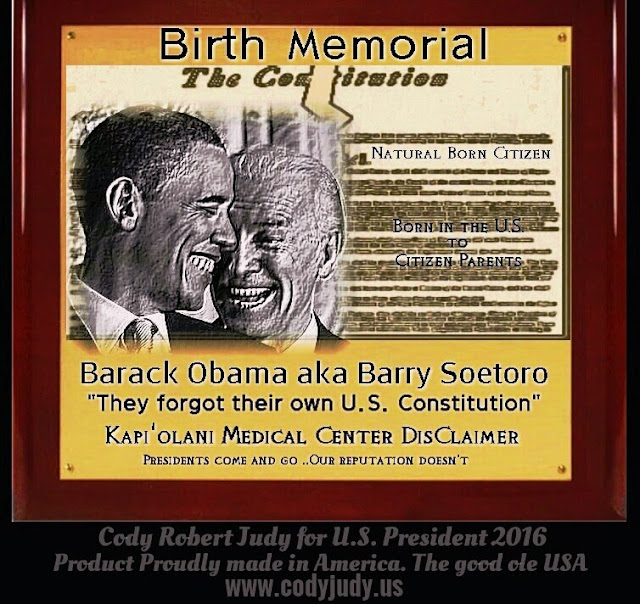 FEATURED AS EDITORIAL: The Post & Email
Republicans Continue to Lose in the U.S. Senate with Lack of Will for the U.S. Constitution

Senate Majority Leader Mitch McConnell is besieged by the perils of the filibuster, inspite of the added arsenal of the nuclear option in their pocket which eliminates most filibusters when it comes to federal judicial nominees and executive-office appointments that can now advance to confirmation votes by a simple majority of senators, rather than the 60-vote supermajority that had been the standard for nearly four decades before being changed by the Democratic Party controlled U.S. Senate, now a dead horse.

Well, perhaps if one civil term doesn't work Republicans should try another that has worked for States and Court proceedings considering and placing Obama's ineligibility in the scales of Justices. Georgia's Secretary of State Kemp made it a goal to insist if Obama did'nt show up for his hearings he did so at his own peril, perhaps it was just a coincidence that Georgia having Obama's ineligibility in their Courts also just before the 2012 election received a total of 264 Million in Federal Contracts as well as $650 Million in federal Port expansion contracts.


Lockheed Martin Corp.,Marietta, Ga. (FA8625-11-C-6597P00069), is being awarded a $218,000,000 modification to contract for purchasing additional Coast Guard HC-130J aircraft. The location of the performance is Marietta, Ga., and Greenville, S.C. Work is expected to be completed by May 31, 2016. The contracting activity is AFLCMC/WLNNC, Wright-Patterson Air Force Base, Ohio.

The bowls of cash came on the heels of Judge Malihi's decision, children born to illegal aliens, tourists and/or terrorists are natural born citizens and eligible to become President about the same time.

So perhaps the U.S. Senate is just not pushing the right levers as they find themselves torn between not shutting the Government down because of Democratic Party filibusters in the funding fight for the Department of Homeland Security to avoid the shutdown of a key federal agency. The DHS budget fight follows an effort among GOP conservatives to roll back President Obama’s recent executive orders on immigration.

Republicans have to realize just about all the favors Obama could hand out have already been handed out, and that still leaves Obama's ineligibility impeachment trial and the power of the U.S. Senate to hold trials on such in the hands of a Republican controlled Senate, as a way to bring Democrats to the edge of their chairs.

It is certainly not as if the evidence of Sheriff Joe's Cold Case Posse could not be brought in before the U.S. Senate and certified under oath as well as myself as a Presidential Candidate who has suffered in standing the direct damages of Obama's illegal usurpation as well as the protections against 'racism' that exist from my testimony because I actually have held both Republicans and Democrats to the Article II, Sect. 1, Clause 5 standard of a natural born Citizen being 'born in the U.S. to Citizen parents. It's not as if actually taking a stand for the Constitution would be seen as ill gotten by anyone when it comes down to it.

YOU DIDN'T KNOW HIM


Obama released his 'long form birth certificate' to quell the national concern he was not eligible by reason of not being born in the U.S., but the U.S. Senate still holds a responsibility to the People to see to it no foreign influence was allowed in the Office of the President by the qualification of 'natural born Citizen' as well as a concern over our national security that someone in the Office of the President acting as President is not a fraud, usurper, willing to deceive the very elect of the United States Government.

A great discussion and interview was recently conducted by WOBC Radio in which former deputy Attorney General of Pennsylvania Phillip J. Berg, who also was the first litigant in the Democratic Party to place the ineligibility card on the table in front of the U.S. Supreme Court, called in during the interview of myself, (Cody Robert Judy)in the discussions of the Tenth Circuit Court of Appeals poll coming up very soon in Denver, Colorado.

The whole scene of the interview was quite a rare scene to consider with so many differing factions of the Birther Arena coming together in rather team oriented cooperative discussion. If you missed the live edition the work of WWW.BIRTHERREPORT.COM, WWW.WHERESOBAMASBIRTHCERTIFICATE.COM, THE POST & EMAIL, WWW.OBAMACRIMES.COM, WWW.BIRTHERS.ORG , as well as WWW.CODYJUDY.US came together. 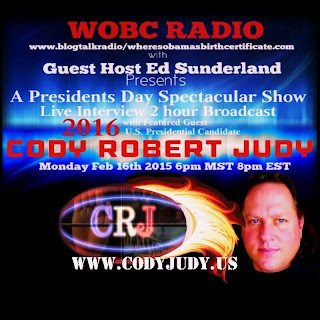 Due to circumstances beyond my control I was late and appeared in the discussion about 20 minutes into it. Phil Berg was the first caller surprising us all and was a real delight to here and speak with. The show continued its amazing information show as SARG called in adding to the conundrum presented by the discussion of Judge Malihi's decision in Georgia I was a Plaintiff to. This show was really a two hour presentation that you shouldn't miss and the turn out of spectacular patriots concerned about our Country and the direction in which we are headed is one that is very encouraging.

I highly recommend if you haven't listened to the show that you find the time and catch it as a rare culmination of concern that is finding its way to a head that no doubt is going to come out as a tulip piercing the ground in Spring in the wonder of warmth the green brings from the barren and cold winter.


We need your help. Will you help us or are the outrageous lies your being told by your elected leaders okay for you and your children? If you won't defend your children and their future who will you defend?

The 2016 Campaign begins now. Please send your contributions and help with the ABC (American Birther Campaign) today and my election for President in 2016 and Join the 262 of us now on my Facebook Cody Robert Judy for U.S. President 2016 site.

Posted by Cody Robert Judy at 9:00 AM No comments: 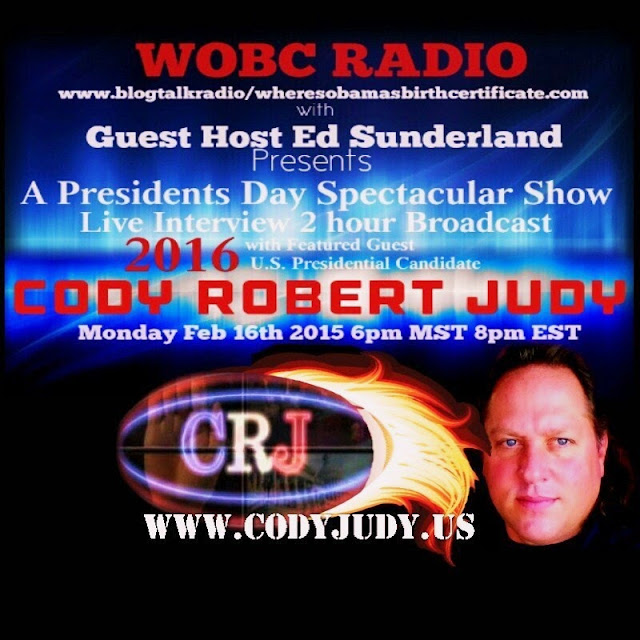 FEATURED STORY: BIRTHERREPORT
The show tonight over at WOBC Radio was excellent! I want to thank Mike Volin and Ed Sunderland over at wheresobamasbirthcertificate.com for having me on. It was great to here from Mr. Phil Berg who was a surprise call in. Thanks Phil for your contribution tonight as well as Sarg and the others that called in. I appreciate your contributions.

If you missed it here's the link the to play catch up. Over all its been a great President's Day and one we all will remember I think.

Our fantastic guest for Monday night is Cody Robert Judy. Cody resides in Ogden Utah, a business owner and graduate of Utah State with a degree in Psychology. Cody grew up in a ranching and farming atmosphere in where he learned the lessons of independence, hard work, self determination and self reliance.

Cody, a presidential candidate and conservative patriot with a passion for constitutional principles and rule of law will discuss his latest court challenge seen on Postandemail, birtherreport.com and many other news sites. What makes this guest subject matter very interesting is the 10th circuit is preparing to discuss opening an appeal to a challenge Cody Robert made regarding Obama's eligibility previously.

Having a high court revisit a case of this caliber is monumental and could very well have earth shaking reverberations. Not a single court in the land so far has allowed anyone a fair platform of discovery. Indeed some who have ran for president eliminating the fictitious "standing" rule and filed charges questioning Obama's legitimacy have been summarily dismissed as having been "Twittered, fact checked, and snoped" as one biased and clueless Judge said

It takes courage, grit, and intelligence to challenge this illegitimate squatter at 1600 Pennsylvania Ave. and Cody Judy isn't the only one who is questioning Obama's credentials no matter what our detached and clueless congress and senate says. Their inaction on this subject is exactly what Col. Larry Sellin said, "by congress not investigating Obama's proven forgeries, they are institutionalizing criminal behavior"

Call in or chat with us on WOBC Monday eve and let's see what we can learn from Cody. "Could this be the break we've been looking for?"


We had a special President Memorial made up today for Barack Obama we'd also like to share with you on this President's Day. 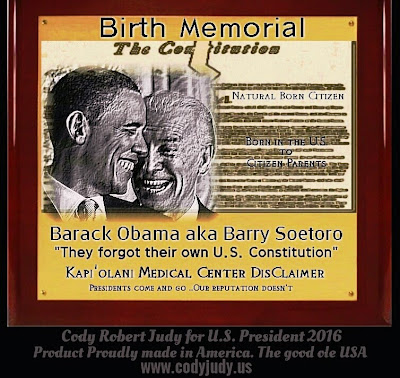 We've had a number of request to have this on T-Shirts and a Plaque and if you are interested please let us know.
Sincerely,

The 2016 Campaign begins now. Please send your contributions and help with the ABC (American Birther Campaign) today and my election for President in 2016 and Join the 262 of us now on my Facebook Cody Robert Judy for U.S. President 2016 site.

Posted by Cody Robert Judy at 9:20 PM No comments: