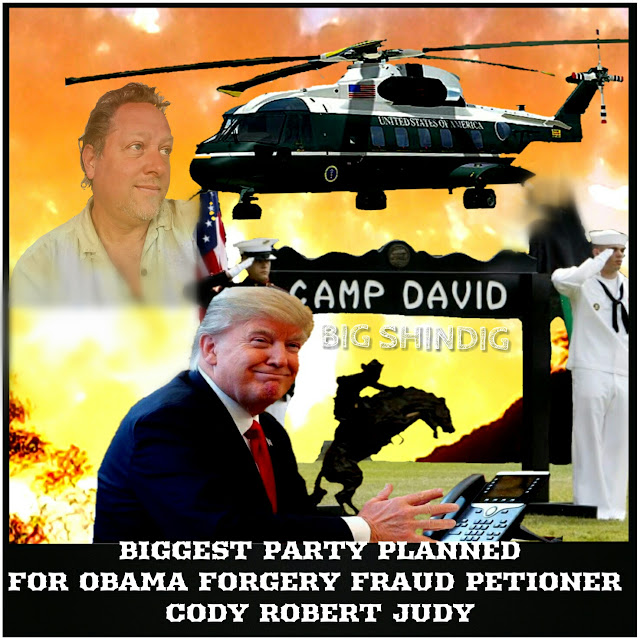 The body double Trump-Team was in place assembled with the regular Team escorting the President of the United States Donald J. Trump. The body-double for Trump was just a hair shorter than President Trump but from a distance the eye was fooled enough for the security concern for which the Team had been assembled.

It was a little disappointing to the Press when they understood they had been "duped", much more by Obama than Trump. But the evidence actually produced showed Obama's Administration had been built entirely on a unconstitutional and weak foundation which made for a precariously dangerous legacy sure to be remembered under the audacity of Fraud & Forgery.

The helicopter planes hummed above as we spotted the landing platform for Marine One. President Trump was waiting as I got off with a smile enjoying the view.

Clasping the President's hand I said, " Hello Mr. President, I'm Cody Judy, and introduced my Guest to him also. The budget for the occasion was built in.

The Party was BIG-TIME , and all you could possibly imagine. Every kind of meat you could want was being spotted on open flames- buffalo,  lamb, and wild bore all favorites of mine.

Fresh sawdust covered the floor adding to the rustic ambience of the Shindig. The cooks and waiters were thrilled to be doing what they loved in assuring the guest were personally catered to in the most enduring and sweet way.

The guest were just  thrilled to be there,  and it was great to see President Trump after such a grueling quarter finally settled in enough to relax from the stress and take in with a smile the entertainment provided on the modest Stage he had a front and center seat to.

The movie in the planning stages already would be a National Treasure. The Plot involved the whole United States being sucked into the biggest Fraud in U.S. History but turning around and thriving with the Truth instead of the Lie.

Such was the spectacular and visionary dream I had June 5th as I seemed taken away by the spirit in a most vivid remembrance and experience.

IN CASE YOU MISSED THE RADIO SHOW I was a guest on last night - here is the PODCAST LINK😊 for a Recap! 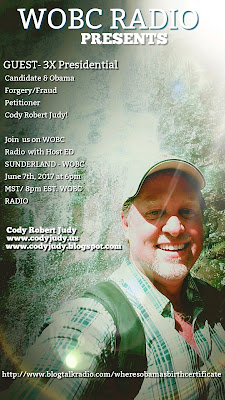 RADIO WOBC ANNOUNCES
GUEST  Cody Robert Judy- the only Presidential Candidate in America who has a "Bi- Partisan" Record in Federal Courts filed to protect the  "natural born Citizen" Clause for the Office of President. The 51 year old 3X Presidential Candidate has 17 Civil Actions in Court since 2008 that included McCain and Obama.
3 Actions in the U.S. Supreme Court.
Cody  Majored in Psychology at Utah State and is the author of Taking A Stand- The Conservative Independent Voice.
Cody has dedicated a large chunk of his life to preserving, protecting, and defending what he calls the nuclear center of the U.S. Constitution in the qualifications for the Office of President. He's also run for Congress and the U. S. Senate. We'll be going into some detail about his latest action in SCOTUS & U.S. Tenth Circuit Court Case, and hope you'll join us on WOBC Radio with Host ED SUNDERLAND - WOBC June 7th, 2017 at 6pm MST/ 8pm EST. WOBC RADIO