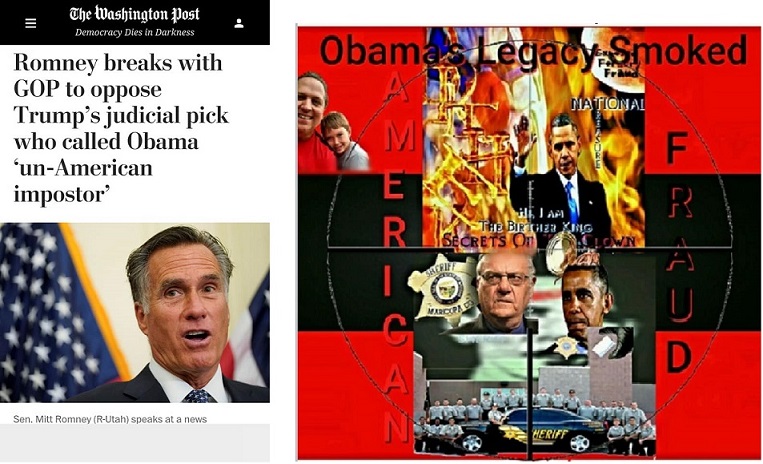 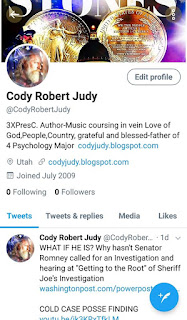 Wednesday MORNING, September 25, 2019 Cody Robert Judy posted his 11.1K Tweet on Twitter which had 3 links, 2 pictures (also above), and read:

"WHAT IF HE IS? Why hasn't Senator Romney called for an investigation and hearing at "Getting to the Root" of Sheriff Joe's Investigation
Washington Post Story
https://www.washingtonpost.com/powerpost/romney-breaks-with-gop-to-oppose-trumps-judicial-pick-who-called-obama-un-american-impostor/2019/05/14/7cd4742e-767d-11e9-b7ae-390de4259661_story.html?fbclid=IwAR1D6wTUASO6eE-0Nyoix54gE7La2kYTtKrvPYr0y5qAH2FalUxQzR3k9Zk 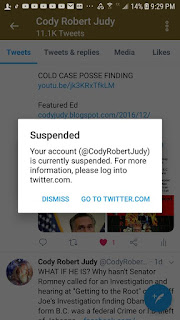 That evening Cody went to his Twitter account and found that it had been suspended. (reference picture on right)

The communication umbilical chord was ripped out with what was extreme political prejudice.

Not only was Cody referencing an article from the Washington Post a well established Printed Newspaper, but he was also referencing an Investigation which included two very professional CSI document professionals at the request of a Sheriff's Department in a Cold Case Posse Action.

What Political Threat could possible be assumed?

Cody Robert Judy was a political opponent in the 2018 Utah Senator election against now Senator Mitt Romney. The hashtag #utpol is considered one of the most prominent Political Hashtags for the State of Utah.

In the Article from the Washington Post , famous of course for the courageously charged investigation framed as the Watergate Scandal notable for the public-root of President Nixon resignation, the [Washington Post reporter]  Mike DeBonis wrote:

"Republican Sen. Mitt Romney broke with President Trump and the rest of his party Tuesday to oppose the confirmation of a federal judge who had referred to former president Barack Obama as an “un-American impostor.”
Romney (Utah) was the only voting senator to break ranks on a party-line vote to seat Michael J. Truncale on the U.S. District Court for the Eastern District of Texas." emphasis added w/underline.
Cody Robert Judy was the only Presidential Candidate in 2008, 2012, and 2016 to non-racially sue first Senator John McCain and then Senator Barack Obama aka Barry Soetoro , which the MSM has totally ignored as a fact preferring the racially charged narrative of the past.

The twitter suspension comes on the heals of a Social Media Learning curve at Political best.

Tue July 30, 2019 a story came out of CNN by Donie O'Sullivan that mirrored the Political axe to grind Twitter apparently has for Trump Supporters stating:

'[Trump retweeted a post from an account operating under the name "Lynn Thomas" that accused Democrats of being "the true enemies of America." The account, which created in September 2018, described itself as a "Fierce Trump supporter" and declared: "I'm not a bot."

Just a few hours later, Twitter had suspended the account, confirming to CNN it had broken the platform's rules. The company did not say what rules the account had broken.]' 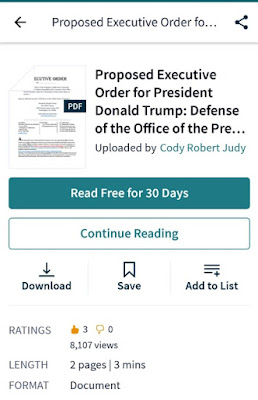 Judy's proposed Executive Order to President Donald Trump has now been viewed by over 8,000 . The two page document culminated Judy's legal battles over 11 years now, and still we see a suffering and sacrifice the media chooses to ignore.

It is anyone's guess as to wither President Trump will every acknowledge and sign the Proposed Order. However, with the extreme Democrat Party charge in the House to Impeach, perhaps a closer look at protecting the Office of the President will be come Political Principle once again?

IF President Trump was concerned about the Corruption in Ukraine concerning the firing of the Prosecutor investigating the then acting V.P' Joe Biden's son who was on a board in question in the Past, why is he not equally concerned about the gravity of Sheriff Joe's investigation that included 2 Forensic Experts on Obama's Long Form B.C, the collaborative corruption that was happening w the Obama Administration's cabinett, I.D Fraud, usurpation of the Qualifications in the Constitution of the POTUS Office, and the fact that tax payers are still paying Obama a Cabinett. Members salary?

Posted by Cody Robert Judy at 3:30 PM No comments: