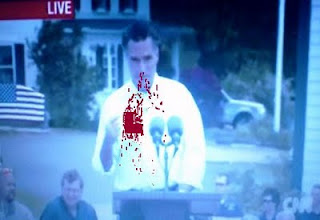 National Security Demand to State Legislatures regarding Obama's Eligibility
If the U.S. Congress has turned a deaf ear on the Obama Eligibility, citizens should turn to their local State Congress to prohibit Obama from getting on the ballot in 2012. This 60 second commercial features just that happening

A bad nose bleed Mitt Romney gets at his New Hamshire announcement speech to run for President. While the country is in a Constitutional Crisis due to Obama's ineligibility, Mitt Romney's silence on the issue is a defining statement about his ability to lead, preserve and protect the Constitution. Also featured is a 20 second commercial at the beginning and the end from Article 2 Patriots at work

Posted by Cody Robert Judy at 6:02 PM No comments: Links to this post