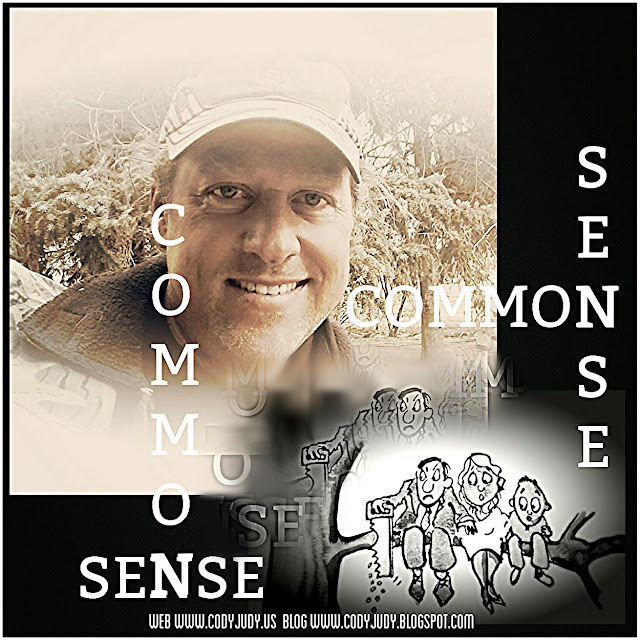 Pamela Anderson was recently interviewed by Megyn  Kelley and what she said was so simple it borders well with the wisdom of common sense in the political and business arenas that are being focused upon with laser like  intensity  with the Public and the Press.

Pamela Anderson Reminds Us of COMMON SENSE: Weinstein’s Accusers Knew What They Were ‘Getting Into’ by Going to Hotel Rooms Alone by Ken Meyer | 1:01 pm, December 1st, 2017

Interesting exchange on the  Article 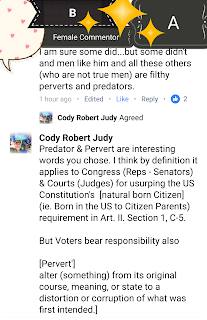 [Predator & Pervert are interesting words you chose. I think by definition it applies to Congress (Reps - Senators) & Courts (Judges) for usurping the US Constitution's  [natural born Citizen] (ie. Born in the US to Citizen Parents)  requirement in Art. II. Section 1, C-5.

[Pervert']
alter (something) from its original course, meaning, or state to a distortion or corruption of what was first intended.]

"he was charged with conspiring to pervert the course of justice"]

an animal that naturally preys on others.

"wolves are major predators of rodents"

2. A person or group that ruthlessly exploits others.

With 320 million Americans as victims to the assaults of these Perverts & Predators I wonder why more women, (near 60% of population) who by natures design are in much more need of individual  protections and rights, are so non-chalant and quite about it not supporting it but very vocal about sexual harassment these days?

Obama's Unqualified Terms added 70K of debt upon every man, woman, and child in the USA. Talk about selling the children? 😓 If you voted for McCain the same scenario pertains of not being Qualified or supporting an Unqualified Candidate.

I sued them both - McCain first.  Was the only Presidential Candidate in America to do so and may have had the least support of any of the them.

If by supporting those who supported the usurpations, the Lord has Judgement, the labels of predator and pervert might also be applied to every individual voters record.

Wouldn't it be a shock if the Lord came out in judgements against every women supporting these unqualified Candidates against her own children's futures as a predator and / or pervert?

The responsibility and accountability must be shouldered by every eligible Voting Citizen for our Future.

It cannot rest upon one person as we may start to wonder why what is happening to us is happening. Of course the Righteous are Tried and Tested for Refinement of their own Principles and Accounting of the Laws of the Land and of Nature's God - the Supreme Creator.]


BLESSED IS THE NATION WITH WISE WOMEN!

There are women I've found standing up against hypocrisy and trying to breath common sense into the #MeToo movement.  The courage those women have against their critics who voice opposition to them laced with brutal shame is amazing to me.

Same Shame
The minions tasked against these warriors use all kinds of gender directed shame Like, " How dare you shame a victim of sexual harrassment! "

Many recess into anonymity that is not unlike those women harassed decades ago claiming they feared not being believed until three weeks before an important Election? IE. R- Moore- Alabama Senate

What seems most dis engenuious to the #MeToo Movement, is that those of real sexual harassment  were ignored and False Accusers find the MSM very willing to Fan-Their-Flame thrower with a Political Motive-In-Mind. How is that a credit to the #MeToo Movement? It's not. It's a dis-service and a calculated abuse. 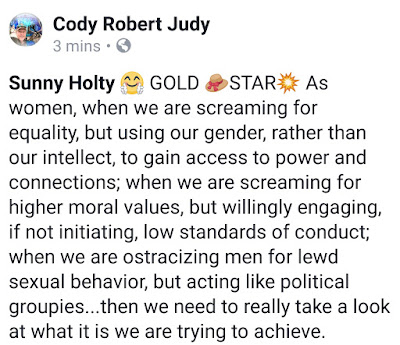 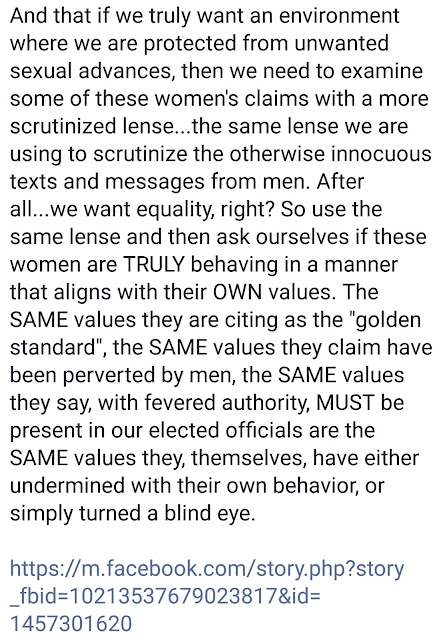 Yesterday I was un-friended by voicing a solicited opinion simply because I acted in light of a Witness unheard, ( the Male) and voiced suspect to the situation referred.

The Female Plaintiff charged she had got up to use the restroom at work - a military environment- and accidentally run into a Male- Defendant coming out of his Office in a narrow hallway.

As they bumped she said excuse me, and he related, " That's Ok. Make it a point to scare pretty women"

She was the initiator of the bump by accident she claims. Her offense claims "the comment made her feel weird" and she was unfamiliar with the Defendant prior.

I voiced she was personally assuming she was the subject of "pretty women" and if he'd claimed a point "to scare off dogs" would she have thought that a good or funny thing to say?

Perhaps in the threatening climate men are faced with scaring off pretty women is a self preservation tactic being used to secure the job? Is that necessarily a bad thing?

There was not a single other friend of hers that did anything but validate her claim and pat her on the back. (Male & Female).

Given her Facebook Pictures and the backlash of abuse being called a "Cave Man" I said perhaps  her best bet was a secure all female environment and wondered if she was advocating segregation of the sexes because she just couldn't handle any testosterone in the work environment?

They were enraged to a point of verbal abuse in response to my bringing up that we actually had not heard from him or his side of the events that took place.

She wrote as if THAT would be a factor in her Female Supervisors support!

The Gender Fight was on using Supervisors and it was clear women are just as capable as men in doing it!

We recall Madeline Albright' s insinuating a Vote for Hillary validates Female and a Vote against invalidates female gender? And Hillary herself used the gender card countless times in an individual characteristic no shame Political Campaign. What's it Teaching?

I was nearly flabbergasted as she related the sexual harassment training that her company insisted upon.

When I objected to the Verbal Assault coming out of the conversation I received a slew of " Oh I feel so Sorry for you. NOT." rebuttals.

I then inquired "Would such have been their advise also to the Plaintiff for being referred in a group as " Pretty Women"?

OMG he referred to you as a "pretty women' to scare off. Fire the sexual predator?

It was then I related most big companies are keeping a watchful eye on their employees Social networking as it represents in their individual capacity a representation for the company.

By that Standard she had really just Red Flagged herself as an employee MOST LIKELY TO SUE HER EMPLOYER and she would be wise delete the whole Post.

Then I was un-friended and she quoted me as being unfriendly to her in not believing there was nothing she related that wasn't true, and his testimony would be the same.

I relate thus episode because I don't think it's sincular in application. I think its happening like an outbreak of a plague. I do not think that False Accusations is going to encourage a Company to hire a Lady.

The more it goes on the worse the Fear-Factor for Companies  hiring Ladies occurs,  and the worse the situation becomes for women in the work force.

It's no doubt a very difficult situation. Feminist seem outraged at any favoritism in the military or business work force towards Males on one hand. The Military has responded by including Females in every way.

Along comes the argument again for Segreagation because women are offended by Cave-Men?

We've all heard " Put Your Big Girl Panties on" , but cash in rewards and fame might  still be a BIG factor as Congress has doled out $17,000,000.00  in hush money for those who took them off in a void of Common Sense. 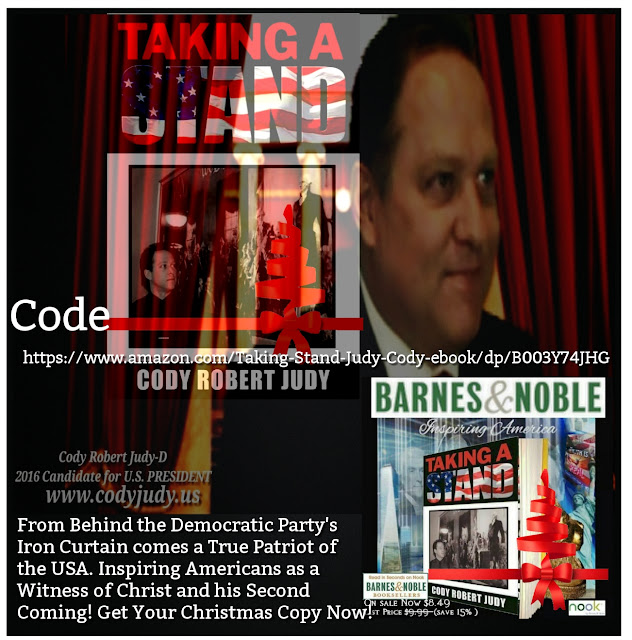 Posted by Cody Robert Judy at 11:15 AM No comments: