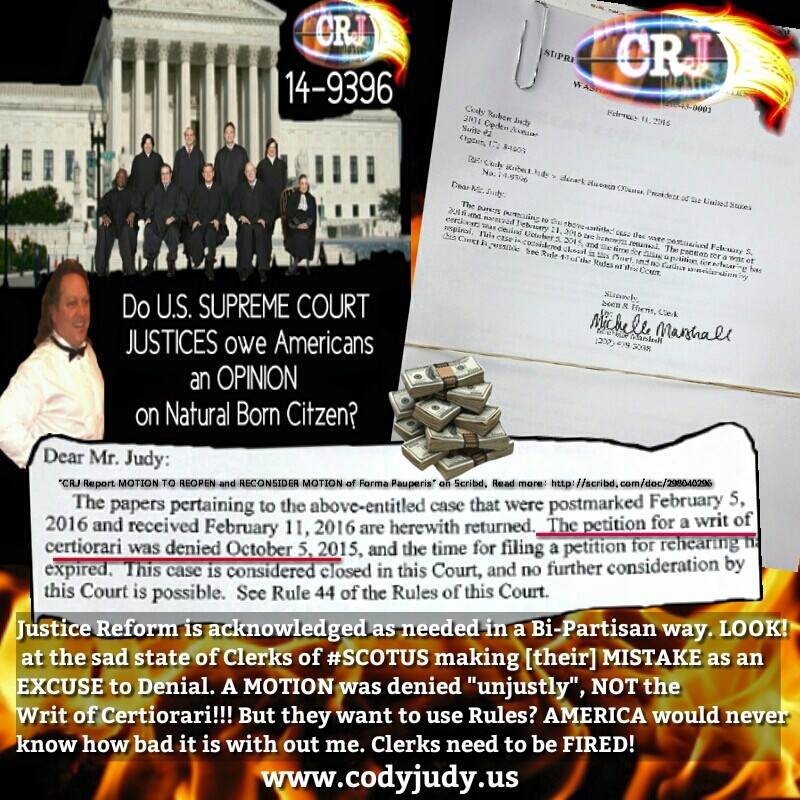 A Criminal Complaint has been filed today to the U.S. Attorney Generals' office regarding 'False Statements' in the obstruction of justice upon the U.S. Supreme Court Clerks office today in a Case with Presidential Candidate Cody Robert Judy claiming damages against the 2008 and 2012 Campaigns of Barack Hussein Obama aka Barry Soetoro. The following outlines that legal Complaint that has the Top Clerks Office in the Country under Criminal Investigation.


Cody Robert Judy said in a statement today, " You know, this Country was founded on the principles of Freedom and Liberty and Justice for ALL. Mr. Trump, the leading GOP Republican Candidate has threatened to sue Sen. Ted Cruz for not being a [natural born Citizen] qualified for the Office because he has standing as a Presidential Candidate.

Damages include much more than the [Office of the President] when your financing your own Campaign. Of course there is no penalty for those running for Office who are not qualified and it is a great burden for those Candidate's stating those who are not qualified are guilty of damages because you have to prove they are not Qualified under the Constitution. This becomes the battle of two individuals over qualifications with the Standard represented in the Constitution. The only way to decide a case between two individuals is in a Trial in the Judicial Branch.

The Legislative Branch only has Trials through the U.S. Senate to impeach or find an acting defacto president as a [disability] by a 2/3rds majority according to Amendment 14, Section 3.


[No person shall be a Senator or Representative in Congress, or elector of President and Vice President, or hold any office, civil or military, under the United States, or under any state, who, having previously taken an oath, as a member of Congress, or as an officer of the United States, or as a member of any state legislature, or as an executive or judicial officer of any state, to support the Constitution of the United States, shall have engaged in insurrection or rebellion against the same, or given aid or comfort to the enemies thereof. But Congress may by a vote of two-thirds of each House, remove such disability.] What does it say to you the American Public when the Court has totally misrepresented the truth of a Case against Barack Obama aka Barry Soetoro in first denying a totally justified Forma Pauperis by the standards of the poverty line of the United States of America? And second, stating a Writ of Certiorari was Denied based on a standard of poverty?

What that should tell Americans is there is a level of great corruption within our Highest Court and it just might take a Criminal Investigation to get to the root of the problem, that then allows an ineligibility Case to proceed pending now.

Cody Robert Judy said, " You just have to understand that there is absolutely NO WAY that the U.S. Supreme Court can even LOOK at a Writ of Certiorari without first receiving payment of fees or granting a Motion for Forma Pauperis. With that understood, you gain a sense of the scheme of the Court Clerks office to cite that my Writ of Certiorari was [denied] when that is just not true. To be politically correct you'd say it was indeed a FALSE STATEMENT punishable by the Federal Statutes prohibiting such claims in the scheme of obstruction of justice. 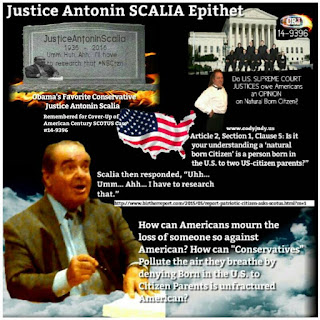 With the death of U.S. Supreme Court Justice Antonin Scalia an additional element of suspicion arises to the public of if by any circumstances his death has any thing to do with the motivation of Presidential Candidates or even a defacto President who very necessarily could be removed from office or find their Campaigns put out on Main Street as frauds and deceptive acting organizations who really could not qualify for the Office of President if they actually were voted in causing real Constitutional Crisis in our Country. In other words, the case is HUGE! and has very real Constitutional ramifications for the Union. Unfortunately, Justice Scalia was on record just a few months ago (May 2015) stating as a leading conservative member of the Court that he did not know, or wasn't sure that a [natural born Citizen] wasn't Born in the U.S. to Citizen Parents.

It's probably the biggest confirming statement against Americans that a U.S. Supreme Court Justice has ever uttered besides the one that conservative Justice Thomas reported to Congress under witness that the U.S. Supreme Court was evading Justice in the [natural born Citizen] Principle of the U.S. Constitution.

The case for obstruction of Justice is being made by '08,'12 and 2016 Presidential Cody Robert Judy who believes that the rules of the race for President prohibit those with fractured loyalties or dual citizenship's to foreign countries by [Place of birth] or [conferred citizenship's by parents] who were foreign or not U.S. Citizens. The fact that we have Candidate claiming both place of birth as well as one parent as a U.S. Citizen confirms to everybody that these two elements are both needed, but its much more intended confusion to the general public not to have a Professional authority of the U.S. Constitution defined in the Constitution to be such evade the question and it is acting as a cruelty and oppression towards his person and campaign.

The Standards of our Constitution in the qualification of the Office of the President were not meant to be Fair to every Citizen. It was meant to be an incentive to be American - Born in the U.S. to Citizen Parents, with no fractured allegiance. This was meant as a Standard and a Protection in the Standard only required in that particular office as well the Vice President's office, mostly because the Office was a pinnacle of an entire Branch of Government in our checks and balances of three branches. 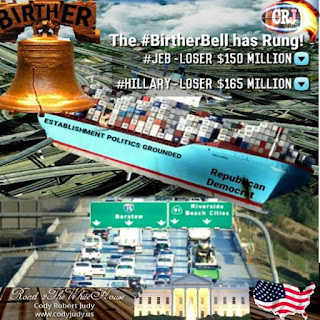 " It is not just silly to see a real danger of not upholding the principle qualification for the Office of President, its very dangerous to our general citizenry. Those who make fun of Birthers really are making fun of the necessity of national security and mocking everything that keeps Americans safe. Its funny until people start being killed as we saw in San Bernardo then its not funny.

This is happening right now and the U.S. Supreme Court is precariously stating they are not the Branch of Government to handle cases of eligibility between two Presidential Candidates? That is simply not the case and they have one right in front of them right now that doesn't require an interference with any forthcoming election which is the safest way to handle this. Obama has served 7 years, what's it going to hurt if he's retired a year early. No one's going to tear the Country down with a 2016 Election happening and him not apart of it. We have contention on this issue from myself and Mr. Trump so both sides of the isle are represented in the Complaint Judy v. Obama 14-9396.

Mr. Trump two days ago made the statement that if Ted Cruz didn't apologize to him he was going to or may sue him for not being eligible for the Office with his standing but appeals could wind up in front of a eight member U.S. Supreme Court.

"For the Court to throw it out, or in fact DENY me access to Justice as they have been doing thus far, is totally an obstruction of their duty to defend the U.S. Constitution and those engaged in that behavior ought to be thrown out for Bad Behavior. They are there for a reason and that is to wade through these types of things with all the evidence available not slink back as cowards of the Constitution. That behavior is sickening and they have never opened this up for a hearing... ever!", said Cody,"I've been trying for 7 years with two cases in the U.S. Supreme Court 12-5276 and 14-9396. This Criminal Action I have filed is just one more step in telling them that obfuscation and arbitrary malfeasance is not going to be tolerated on the bench without consequences; let them come that may RIP Justice Thomas of 'natural causes'."


Here's the Link to Contribute if you'd like to Cody's Campaign improve your record for Taking A Stand for the Constitution.
www.codyjudy.us 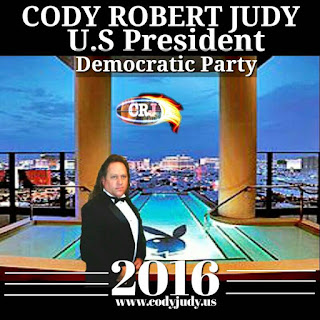 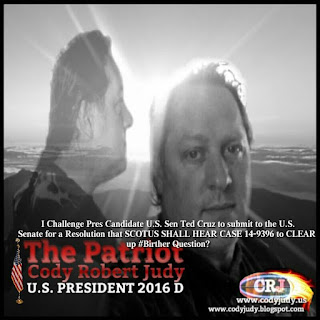 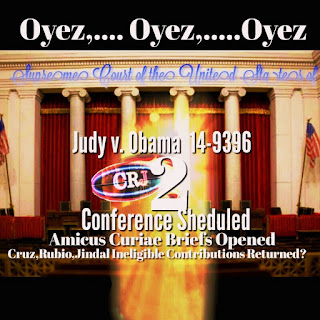