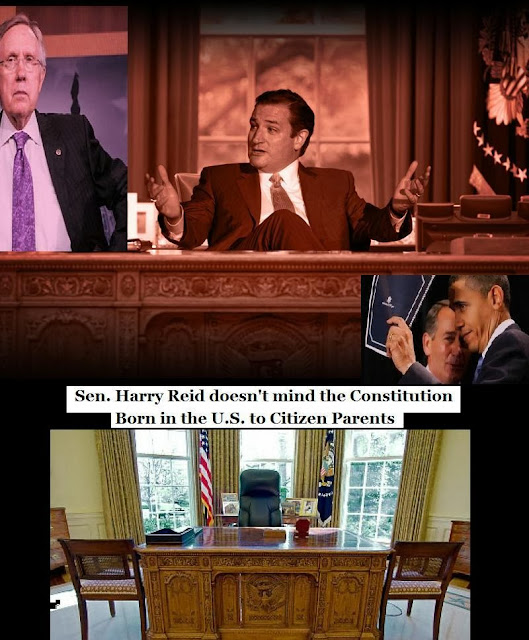 A Judicial Committee Hearing in The House has been scheduled January 2014 to impeach Obama as a disability using my testimony among 12 others as to his competence and eligibility for the office of President. I was the only Presidential Candidate in the Nation Sir that sued McCain ’08 (Judy v. McCain Las Vegas-NV.) and Obama-’08 & ’12 (Judy v. Obama USSC) on the eligibility principle, so my testimony is seen as rooted in principle, non-partisan upon GOP use, and non-racial towards Obama. (USSP - United States Supreme Court)

The Hearing in the House will be open and transparent with all evidence to the public, at a precipice of Debt Ceiling negotiation, in a charge by The Tea Party Patriots; and an irreparably hurt GOP. The rough-shod trampling treatment, not so much of the GOP, but of the Constitution is going to stop and it’s my hope the Democratic Party might be open to that based in Civil Rights rather than opposed.

My witness as a Democratic Party Presidential Candidate has been underhanded by the USSP Clerk’s Office in Judy v. Obama 12-5276; has official Civil Rights standing to show the evidence of law enforcement expert investigations as well the document expert used by reputable law firm Perkins Coie and that will all be openly documented, reported, and unanimously resolute on the facts Sir. Obama will be impeached as a disability under USC Amend 14, Sect. 3.
That then will come to the U.S. Senate with a fully informed wide awake American Public in a perfectly timed debt ceiling catastrophe whereupon your refusal to summon the Senate on facts and evidence will destroy all trust and confidence for the Democratic Party during the 2014 Elections. Your name will be tagged in this, but it’s still your decision which way it’s tagged Senator.

Another outlined option for your consideration:

With the greatest compassion for Civil Rights, under your leadership, the U.S. Senate moves for trial first; before the Tea Party dresses up like Indians and dumps the tea in the harbor. Reparations of 20 million are recommended for my civil rights and a clerk gets fired at the USSC. In the interest of the Democratic Party, Obama and Obamacare is an open public disaster now, with no more elections Sir. Obamacare isn’t legal, signed by an illegal alien. Slavery was once legal also in the U.S., it’s not legal anymore. A fight for slavery is a losing fight and if the roll out hasn’t shown you that I don’t suppose I can. I don’t hold a lot of hope for your consideration, but I do hold out some if you consider a few things.

Politically speaking, consider the blow to Republicans made standing for generations. Republican potentials in the wings eyeballing the Presidency not qualified under the ‘natural born citizen’ clause including- Ted Cruz – Marco Rubio – Rick Santorum – Bobby Jindal, even perhaps Schwarzenegger.

Additionally and immediately, the conservative radio-show hosts collateral of Limbaugh, Beck,& Hannity are seen as anti-constitution, as consistent anti-birthers in their entertainment; rather than coming around to The House’s position they have to acknowledge yours. I will consider you opposed to this option October 31st,2013 having placed this strategically within trusted media sources, and will in due course reveal this letter of your consideration and informed stand upon the facts.
Sincerely,/s/Cody Robert Judy