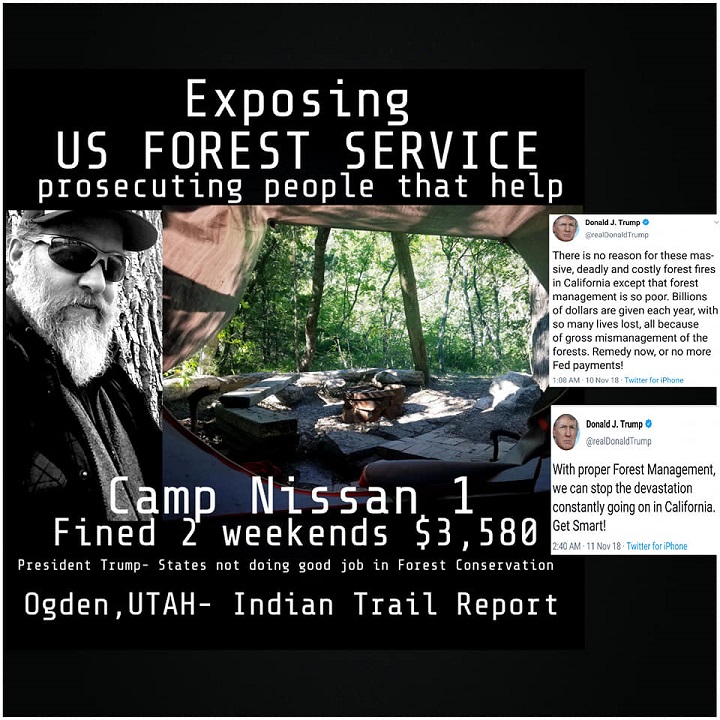 Part I. of II. In an unbelievable case of Biased Profiling and National Forest Neglect, Cody Robert Judy takes you into the seedy world of US Forest Service Targeting and abuse of authority in “Caring for the land and serving people” an example of what President Trump Tweeted "States Forestry Mismanagement" regarding California Forest Fires.


Part II. of II. Part I. of II. In an unbelievable case of Biased Profiling and National Forest Neglect, Cody Robert Judy takes you into the seedy world of US Forest Service Targeting and abuse of authority in “Caring for the land and serving people” an example of what President Trump Tweeted "States Forestry Mismanagement" regarding California Forest Fires. 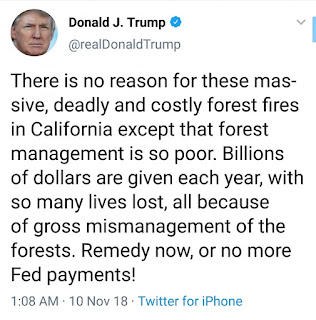 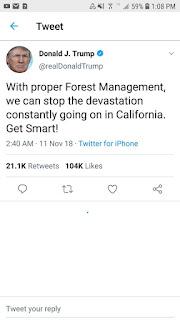 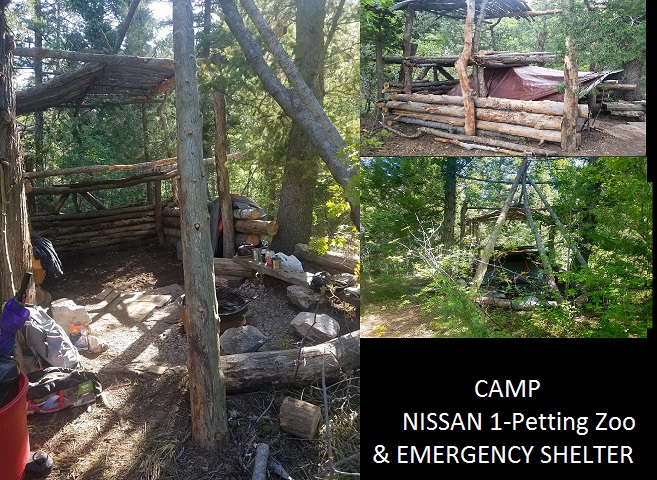 A US Forest Service Proposal

Dear US Forrest Service
Thank you for your attention to our US Forrest.  Approximately June 3rd, 2018 I received a visit from one of your Ogden US Forest Agents who issued me 3 tickets. While they were unfair, I understood with the limited explanation why they were issued. This letter I hope will further explain why I was doing what I was doing, and the purposes that I hoped would serve the general public and the US Forest Service in a mutually rewarding endeavor.

I am semi-retired and really love the forest. I am an experienced hiker and really have a heart for the US Forest. About the end of March I made my way up to the Emergency Shelter on the crux of the Indian Trail Hike in Ogden, Utah. While camping out I had a dream of Camp Nissan 1 that would serve the area in case of emergency or accident of a camper/tenter or hiker, and also be a sweet attraction for the kids who come up on hikes, but never are able to interact with any animals.

I became very interested in the old camping sites left by the Civilian Conservation Corp of the 1930's that had a camps where the men lived while building the rock wall along the Ogden River. As I became familiar with the area in hiking it routinely I also observed a few tent campers would come up; Many hikers.

If there were any serious accidents a temporary Emergency Shelter would be a great service for any accident victim while a Life-Flight Helicopter came in to the greater field for pick up. This was the strategic thought in mind in building out of downed-dead timber the approximate 12x12 wind shelter.
The challenge in building this was in [not] using any other modern building material and using old historical push-pull-pinch and gravity methods to secure big timber.

In the dream I had, we had a couple of sheep, goats, and even a small bear which may have been a raccoon who had been taught some tricks. 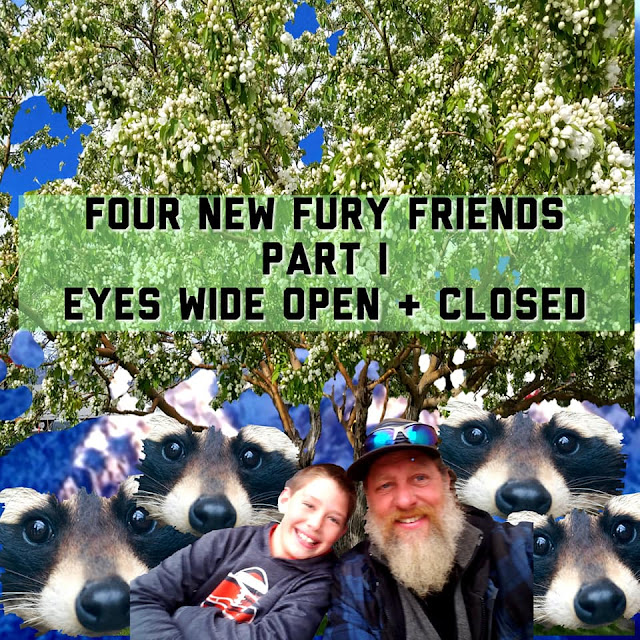 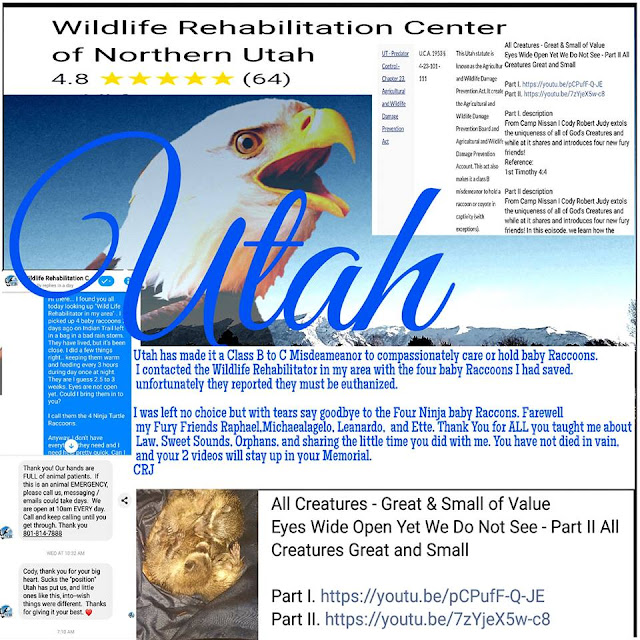 As I worked on the project, my hope was to present this to the US Forest Service and be taken serious, so I hoped to just at least get something to show or present to you.
In assembling the downed dead wood in my spare time, I began to think that the shelter would someday provide a very much needed Emergency Shelter. Especially as I began to see and hear the parties that teenagers were having up in the open field camping site. I saw and heard a lot that would and should be a heads up for the safety of everyone that has used or will use the Indian Trail and or camp sites.
In the emergency management end of things, it is only a matter of time, if it hasn’t happened already, before an:
Alcohol poisoning or Drug Related death occurs

And the Emergency Shelter I put together will be a great asset to the US Forest Service and of course any victim.
Nissan 1 Camp is located strategically adjacent to the most popular Tent-Camping Field and very easily could be used for a helicopter life flight landing pad. Nissan 1 Camp is much more relevant to any hiking injury or emergency evacuation that every became necessary for unfortunate accidents in the area than the emergency shelter on the map at the top or crux of Indian Trail and the adjoining Ogden Trail.

This “party” happened the night of the day, I was ticketed 3 tickets. These were high school kids and I heard them all night and their conversations close by of every illegal drug available to them and being enjoyed that night including LSD, Marijuana, Meth, and Speed. 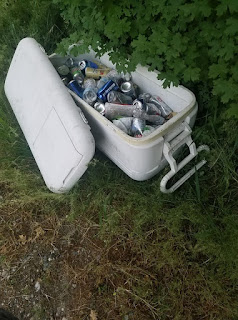 This was left at the trail head site the morning after, and no tickets were issued by the US Forest Service that night to under-age kids drinking and using every sort of drug on the illegal market. Many cans did not make it down.

JUST FOR THE FUN OF IT!

In my experience I saw a lot of kid ( all ages) enjoy the Indian Trail Hike, but one thing was and will be forever missing on this hike unless it is provided. That is a real life experience with an animal. That is why I thought and in my dream it was such a good idea to have a couple of domestic animals like a couple of sheep and or goats or rabbits that hikers, especially kids, could come up on the hike to enjoy petting.

I envisioned a field trip of elementary 3rd & 4th graders coming up for a hike and ending at the petting zoo. What a wonderful and fulfilling experience a domestic petting zoo would be to enjoy along with the hike.

These were in short my thoughts in Camp Nissan 1.

With not much more effort these could be in place and I would certainly be happy to discuss any details with anyone so interested in a private and public partnership to make the US Forest a safe, happy, and fulfilling experience for anyone.

Everything starts with a dream and the pursuit of it.
Nissan 1 with a few piece of tin on the roof would be every bit as adequate as the Emergency Shelter on the map and I hope the US Forest Service would find more interest in assisting to make a safe, happy, and fulfilling experience for everyone than writing out the 3 tickets they handed me.
At the very least, I hope you will entertain the proposal.

Posted by Cody Robert Judy at 4:10 PM No comments: