SHOULD OBAMA GET A PASS BECAUSE HE’S BLACK? Conservative Radio seems to Advocate "Yes" 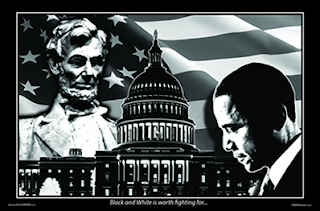 SHOULD OBAMA GET A PASS BECAUSE HE’S BLACK?


Mr. Rush Limbaugh said today that it was not likely that America was going to do anything about Obama’s Gates – Fast & Furious Gate –Gun Running to Mexico Cartels leading to Border Patrol Agent Brian Terry’s Murder; Benghazi Gate- Gun Running to Muslim Brotherhood in Syria leading to Ambassador Chris Stevens and three other American servicemen’s death; Boston Marathon Bombing –intelligence breakdown on Saudi Arabia individual; AP News Staff Wire Tapping – eroding freedom of the press; IRS Profiling of Conservative Tea Party Non-profit Groups and many other Conservative 501c3 and c4 Applicants and of course let’s not forget the handing out of a fraudulent and forged long form birth certificate at the White House Press Room to America.

Rush advocated “This should ALL be handled at the 2014 elections’-‘ This is what you get when ANY liberal is in charge’- ‘America is not likely to do anything to the first elected ‘black’ President – its not going anywhere’, were all a few of Mr. Rush Limbaugh’s spouts today. Oh, don’t let me forget the most important one –‘ I’m always right!’.
The first thing I am amazed at is why Rush, Glenn, and Sean are even talking about the first 5 scandals as they gave Obama a pass on his qualification – a fraudulent and forged long form birth certificate. Of course it would shock the Media that they wouldn’t give Obama a pass on 5 scandals but as we see that’s exactly what they are doing so the Media has nothing to worry about.

Check out Rush- Obama is not in any trouble - first black President being removed from office
http://www.youtube.com/watch?v=A2kOso4VLQo

Well it’s the truth. I mean if you give someone a pass on a fraudulent identification why worry about the money he is taking from the bank or the people he’s shooting on the way out? You’ve condoned the way in which he is able to do it.
Well, I’m not black but if I were I can’t imagine anything that could be so hurtful and racist than for my children to learn that they had a free pass on treason, sedition, inciting hatred against America, and let’s not forget murder, all because their skin was black.

I cannot imagine the segregation that must be felt as Mr. Limbaugh spouts out to the Conservative world – Republicans and Democrats’ alike- that if you’re black you have a different set of rules in America. Isn’t it good enough to just be American anymore Rush? Why don’t you mention Obama as half white if your going to say America won’t treat the first black President like any other and demand he at least be qualified for office?

How do you even have the gall to bring up ANY of these other scandals and continue to ignore the one that has teeth?
As I listened to the MIB Broadcaster of ‘excellence’, I thought this indeed was a poor show and I hoped Rush was wrong because if he was right the biggest lie of all was that we didn’t have a Constitution of Laws for Obama to destroy- Conservatives had already done that long before Obama came along. Indeed that was the reason I sued McCain first for not being a natural born citizen if you must know. I thought conservatives had enough in-house problems to address before we moved to liberals.

Believe me – I have tears swelling up in my eyes for America right now. If America’s ‘white guilt’ is so powerful in America right now that we’d rather give a black President different treatment than a White President then the first black president doesn’t offer America anything worthy of boasting and sure doesn’t remove any hint of American Value. We’ve come so far yet are in the same sh**.

I’ve long felt sorry for blacks because of Obama’s ineligibility and cheating at saying he was Constitutionally qualified to be President when he’s not a natural born citizen See: Judy v. Obama – Born in the United States to Citizen parents according to his own representation to America but I’ve never associated anti-Birthers as racist till today but it’s true.

If you can’t have a Constitution in The Republic for which we stand for everyone regardless of race, religion, gender or prior condition of servitude you are representing yourself as the opposite accordingly.

That is a strong message to Congress, The Media, and We The People and demands Obama be removed from Office in all haste to save the law – to save our Constitution – to save America and the decency of integrity, honor, truth, and the American Way.

What the hell are we really representing to the world Mr. Rush Limbaugh if you and Glenn Beck get to spout your racial bigoted hatred on the air to America for three hours today railing against Birthers as Conspiracy Nut-jobs that you have proudly abstained from if I am silent?

Glenn Beck - While everybody was calling for impeachment over the birth certificate or everything else- the guy everyone was calling a conspiracy theorist, (Glenn Beck referring to himself as that person) said the Birth Certificate stuff was non-sense
http://www.youtube.com/watch?v=5JoTUkPiUuU

My parents both made it very clear to me that if I was wrong in a judgment call it wasn’t the Principal’s punishment, or the Police’s punishment or the adversary’s punishment I should fear, it was theirs. Of course I believed them and they were true to their word.

Well, Mr. Limbaugh and Mr. Beck and Mr. Congressmen you are American children and We The People are your parents.
I’ve never felt such resistance against the law as I have from you two. Did you know something about Congress and the laws of the qualification demanded in the Constitution that I don’t?

If you did know something of the way our Country was run and the Constitution being laid waste long ago and the oath of our State Leaders and Federal Elected Officers being different, then the actions of Obama with the ball should come as any surprise at all because when the law isn’t upheld bad things happen.

“Bad things Happening” might be what is engraved in the White House now. Think about how hard it’s going to be to regain the integrity of America after Obama?

You know one of my idea’s for getting America back on her feet was to have a “income-tax sabbatical”, check it out along with some of my other ideas on the platform. I had a dream about it over a year ago. Even at that time I thought to myself that was a pretty radical idea, but with the damage Obama has done with the IRS profiling known before the 2012 election, I’d say it doesn’t seem so farfetched anymore.

Rush - Glenn – Media all of America who doesn’t believe Obama should be held to the same standard as a white President in the qualification demanded by the Constitution, one word comes to mind – REPENT.
I love you al,l but ultimately you’re going to be the biggest losers of this little charade you have going and I will be the biggest winner you’ve ever seen. It’s really up to you if you want to keep playing and saying “ You just want the TRUTH”, because when the TRUTH whines up and hits you in the face, you’ll be lucky to get off the ground, and it may take you a very long time to get back on your feet.

You can read other letters I’ve sent to Rush Limbaugh and Glenn Beck in my book Taking A Stand – The Conservative Independent Voice.

Meantime, I’d like you America to share this post with your social media networks because the TRUTH is, nothing has the power to take Obama down other than the Constitution and its very hard to exact the law upon American's and excuse the President from the Constitution qualification demand. Maybe that's my problem having the law exacted upon me, but it seems the "law" is hell bent to earn disrespect,and I always thought it should be wanting to be "respected".

A lot of this that we are experiencing has nothing to do with "politics" and everything to do with the dereliction of the United States Supreme Court Justices in the Judicial Branch of American Service to the Constitution. Wouldn't be happening if they had respected the Constitution in Judy v. Obama 12-5276. If any impeachment proceeding are necessary that Court is where it should begin as Obama is not qualified for impeachment however the Justices are.

In that sense, Obama has been given a pass IF he is denied the United States Constitution. Treat Obama fair – let him have the part of the Constitution that matters most to him: The Qualification of the Office of the President Art. II, Sect 3, Clause 5., by advocating he be removed by Congress as a disability according to Amendment 14, Sect. 3.

Indeed Black and White is worth fighting for. Enjoy the songs I’ve made regarding Obama’s Disability.