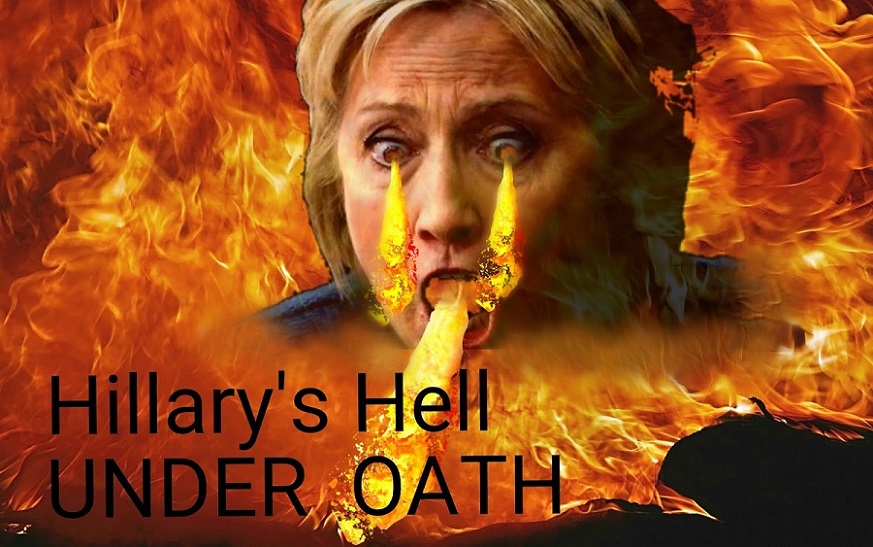 
Getting Hillary Clinton under oath was something the FBI Director admitted to Congress they did not do during her deposition with the Law Investigation Agency, although it's a Felony to lie to the FBI.

The biggest question that the Public Watchdog JUDICIAL WATCH  has appears to be the one the FBI did not ascertain in their eye witness testimony with Mrs. Clinton. That of the obvious responsibility and accountability to the Public in the paid public service position of Secretary of State through the Freedom of Information Act (FOIA) during the years she held that Office.

A USA Today story appeared touting that Clinton remarked Colon Powell had told her to use private email in correspondence, but not to set up a Private Server. Powell had used AOL.com for quick unclassified correspondence at a time when email was just starting to come into the mainstream of Government, but during Clinton's tenure had evolved leaving her no excuse whatsoever to fall back on her predecessor headaches of Government Efficiency and Clinton went way outside the Firewall with her own private servers the FBI were forced to confiscate to recover the responsibility and accountability Government has to the People they through FOIA. But the FBI didn't confiscate the private Clinton Servers before Hillary got her own Lawyers to wipe clean any and all information she claimed Private.

Obviously Hillary had more concern with her Yoga and Family Charity Foundation Chit Chat than she had concern with protections of Top Secret Material FBI Director Comey testified under oath to Congress they found in some 50 intelligence exchanges.

The other clear SMOKING HOTSAUCE causing Clinton Heartburn is the correlation of Hillary raising cash for the Clinton Charity Foundation Fund while she was on Duty as Secretary of State with Foreign Diplomats and Foreign Governments, complicated with promises, appointments, and multi million dollar deals made with America's strategic national natural resources reserve of uranium and other intelligence, and weapons cleared through her office as Secretary of State precisely at the same time the Clinton Foundation Charity was receiving a ocean tidal wave of cash. 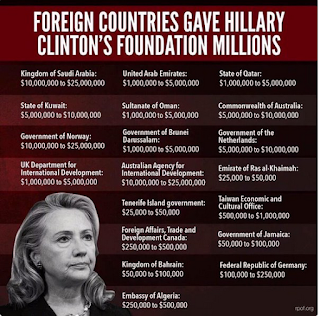 [Judicial Watch is a right-wing organization that has been attacking the Clintons since the 1990s. This is just another lawsuit intended to try to hurt Hillary Clinton's campaign, and so we are glad that the judge has accepted our offer to answer these questions in writing rather than grant Judicial Watch's request," Clinton spokesman Brian Fallon said.
In a statement, a Judicial Watch official evinced no disappointment with the decision.
"We are pleased that this federal court ordered Hillary Clinton to provide written answers under oath to some key questions about her email scandal,” said Judicial Watch President Tom Fitton. “We will move quickly to get these answers. The decision is a reminder that Hillary Clinton is not above the law.”
Clinton had opposed any deposition, saying it was pointless, in part because Clinton has no emails or server equipment to turn over for further review since it was all taken by the FBI during its investigation.]
Read http://www.politico.com/story/2016/08/judge-wont-order-deposition-of-clinton-in-email-suit-227214#ixzz4Hp8cRL4Z
LOCK HER UP the Scream of Millions of Americans Hillary Clinton has been responsible for inciting with her Actions against the People of the United States of America. Undeniably the most divisive figure of outragious Justice  unparalleled in American Political Convention History ; the result of her own high octane gasoline steaming out of her mouth like a dragon of bald face lies to the American Public.

Listen to the Door Slam at the End of this. You know, the problem with having the FBI Director AND Congress [together] calling you basically a Domestic Enemy of the United States of America while you held the Secretary of State Office,  (and the only reason given that you were not Arrested and Indicted being you were incompetent/or/ not sophisticated enough to understand/) , is People have very credible Witnesses to believe you are Crooked Hillary. #Democrats who support you are enabling Crime and fighting for Corruption in Government which is most oppressive to the People. I can't support that. If the mark of being  one of the most advanced Nation's on planet Earth is big Government corruption,  poor Nation's are richer in God's favor of Justice and should be our examples of Truth and Faithfulness to their People.

Hillary failed in a Government Office to Account to The People and did so knowingly, and threw everyone in the State Department under the Bus to save her hide. You want to Redeem that Hillary,  try having 30,000 Emails recreated you told your Lawyers to go through and Trash that are in, supposedly,  the Dump for they may yet be lurking in the Servers of Sabatoge as the CrackerJack prizes subject to Blackmailing the Office of President by HACKERS. #ClintonEmail #DemDebate

Sad- You have Trusted the Evil Theft of Hackers over the mercy of the United States People. Your judgement was Short- Circuited and short-sighted. That vision impairs the People, destabilizes our Government Authority, and undermines Justice for all.

Dishonesty at THAT Level Hillary is an assault upon America's Foundation and an assault upon [every American] and while you pretend not to Notice this and (((cling))) to the Democratic Nomination received  similarly in a lack of integrity,  complete embarrassment to a fair Primary Election, the Equality of Gender, and the advancement of women,  you simply further the narrative of your incompetence, a sociopaths logical reasoning as a Domestic enemy throwing the women's movement back to a time before the 19th Amendment ratification August 18th 1920.

If Trump never paid anyone he ever hired... ever in his life... he could not suffer a Tenth of the People you hurt. It went with the job of Secretary of State. A responsibility far out weighing by sure numbering even your constituents as a New York Senator. Your usurpation soiled , stained and sullied your resume as an elect First Lady, a New York Senator for the U.S. Senate, with a million miles and four years of corruption because of your own insecurities and weaknesses manifest in your howling insatiable  appetite for a [guarantee] which led thee cross the crooked sky for [the favor of the World] in pursuit of the Office of President rather than accountability to your own People in the United States of America. Were we ever that bad to you? No!, we were not.

The embarrassment Hillary Clinton you are responsible for with your Lies, Tricks, and backdoor Deals as the top Foreign Diplomat of the U.S., that include currying a family money laundering Charity assigned only to build and maintain a Presidential Library (that unlawfully extended it's  bounds of Charity to illegal foreign and domestic "favor" for weapons sales, natural resources of strategic Uranium and other national securities and intelligence ,  and a Network of Pay-to-Play Media players, providing sparce accountability through the Office of Secretary of State, you were entrusted with has permanently stained that Office , as well the Face and Burden of Justice in the United States as if you had bloodied your grandchild's face along with all the faces of America's children with your fist in an outrageous Domestic Assault.

For #SuperDelegates or #DemocraticParty Members to actual want you any where near an Office of our Government, ever again, only shows me the deep pit of Hell you've dug for them to intelligently follow you in to the tank of sociopaths now gone and dead, who asked as leaders their followers to drink the poison punch whose faculties you had numbed with tall tales of your savior Iscariot qualities you call little tiny mistakes that they should forgive and forget in the same week you made them.

I,  like millions of other Democrats understanding the Balances of Justice, the incredible mountainous national debt piled upon our future generations, must STOP! and ask where are our Jobs? Where is the Engine of America? Why is it sputtering in less than 3% growth in 7 years in the non-sensical rational of Anti-Birtherism?

Where has the Anti American Fervor come from in the Office of the President that we the Tax Payers have come to Pay the ransom for kidnappers? Why has Donald J. Trump procured the favor as a known Birther to the GOP Nomination a statistical tie with you now if Birthers are Fringe?

How did you get so out-of-touch with America that you viewed America as hostile to your collecting millions of dollars in Foreign Government Pay-to-Play schemes and came to favor foreign favor over our own to you with Election? "Have you know Honor?", isn't the drama scene in a movie it's a call to reality drawn out of us by your own action unworthy of American respect and honor that you sold for a few pieces of silver.

Renounce your Corrupt Nomination for the sake of Honor and regain your favor in the Forgiveness of our Great Nation under God with Liberty and Justice for ALL. #HillaryClinton

The following Video underscores what may indeed be Hillary's Lack of Sophistication reported by FBI Director Comey in his detail to Congress about Hillary's Desposition, or in other words incompetence, which may indeed be related to what some experts are calling a serious Health Hazard in Parkinsons Disease Signs.

This Video has been seen by many working in the Health Industry highly trained and directly associated specifically with Parkinsons disease. The video has been called devastating to Hillary's Presidential Campaign and a must watch for every Democratic Party Member concerned about the coronation and political corruption that was exposed in the Democratic Primary.

The involuntary muscle failures may come as a startling graphic surprise to many unprepared to see the warning signs many in the medical field are trained to spot.  Viewer Discretion may be advised:

The DNC must STOP this fraud and danger to the Country and Democratic Party.


In the meantime, if you haven't seen the new song by The Cody Robert Judy Band you have to!
HILLARY

Posted by Cody Robert Judy at 5:39 PM No comments: