As the Onion layer Peels More Than They Bargained? What may be an Impeachable Offense of the United States Supreme Court Justices? 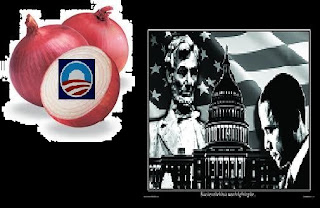 As the Onion Layer Peels More Than They Bargained?
What may be an Impeachable Offense of the United States Supreme Court Justices?

As the relentless evidence persist on the fraudulent long form birth certificate the once sought after coat-tails of Obama's and his regime are getting shorter and shorter, and soon could begin to erode the conduct and professional careers of even United States Supreme Court Justices!

There could nie be a crucible Obama fears more than a full fledged Congressional investigation on the document he handed out from the White House press core room in 2010. Just prior to Obama's MAYDAY MAYDAY MAYDAY and damage repair kit of pulling out of his hat the ill faded FLASHY News report that Osama bin Laden was dead and the aftermath of the mishandling of his body.

Sheriff Joe Arpaio's Cold Case Posse have left little stone un-turned. “We have obtained an affidavit from a certified document analyzer, Reed Hayes, that states the document is a 100 percent forgery, no doubt about it,” said Cold Case Posse Lead Investigator Lt. Mike Zullo in an exclusive interview with WorldTribune.

This Cold Case Posse Investigation was the same one received,documented, and mis-handeled in my United States Supreme Court Case 12-5276 Judy v. Obama and could be an impeachable offense of Supreme Court Justices, unless they turn on the dime now!

Denying my Civil Rights as a democratic party candidate for President in 2012 shall not be forgotten in contest with Obama in short order, especially to the bald face deprivations of Justice handed out to me by Court clerks of that Court, presumably under orders of the Justices.

Cold Case Posse Lead Investigator Lt. Mike Zullo in an exclusive interview with WorldTribune. This is a key development, asserts Lt. Zullo, because Mr. Hayes is a certified handwriting analyst and forensic document examiner who worked repeatedly for Perkins Coie, a reputable law has represented Mr Obama in the past.

"Mr. Hayes is a Democrat whose business is based in Hawaii. He cannot easily be accused of having a political axe to grind in this matter, explains Lt. Zullo."

"Why would these experts risk their reputation and also commit perjury? It is therefore kookier to disregard these assessments summarily than to view them with an unbiased eye."

"The evidence currently being accumulated by the Cold Case Posse requires consideration. It is time for Congress to do its constitutional duty and examine all this hard evidence in the clear light of day."

It seems odd that while Zullo's work has been cut out for him in simply getting Congressional Representatives to hear his evidence and concede to the TRUTH, corroborated by experts in fields they have to respect, mindful of the catastrophe to justice, if they simply as has happened in the past choose to ignore.

But this has happened before at what some would call the "heights" of justice rather discriminating justice rather than upholding it. The same report of Obama's false/fake/fraudulently fabricated long form birth certificate has record in the United States Supreme Court in Judy v. Obama 12-5276.


If Congress does consider the matter of its own reputation and the trust accounted to the Legislative Body as a check and balance of the Judicial and the Executive branch as intended by our Republic for which we stand, the places for the United States Supreme Court Clerks as well as the Justices to hide will be left in only the clefts of the rocks and caves of the underground world.

Its is truly a very sad disgrace of our Civil Rights, your's and mine, that these alerts of fraud, abuse of power, indiscretion of law and order on which our Republic has been built firm have been chipped away by the officers so trusted to enforce and uphold it by their oaths to that particular duty.

The belief in an unjust God in Heaven must be their creed, particularly opposing our Lord so insinuated within our United States Constitution as to recall his birth in the great signing day remembered as Article. VII., "done in Convention of the Unanimous Consent of the States present the Seventeenth Day of September in the Year of our Lord one thousand seven hundred and Eighty seven..", of this beloved document of our history, our head, and our body near abandoned by scoundrels seeking with every breath the destruction of We The People.

I learned an interesting thing reading George Washington today. In only the 2nd Congress when it was decided an Army needed to be raised to protect the American colonist from more advancing taxes, this is after the Boston Tea Party, and a few skirmishes had taken place like Bunker Hill, it was in the interest of many to have someone born here in America to be appointed General of the Army. George Washington, actually won favor on that point and a few others securing the South's support for the first ever General of an American Continent army.

This was before The Declaration of Independence and before the Constitution. I guess I found it interesting that the point was well understood at before anything was written down "Born in the U.S." was very important for the top guy leading the army. Interesting point "a natural born citizen" born in the U.S. to Citizen parents accept if you were a citizen at the time of the adoption of the Constitution came to be included as a pre-requisite and qualification of the Office of the President. I had no idea that ideal had come to bear on that important office of "general" long before any Constitution was created and actually did come into favor in the decision for making George Washington the first General. This was before he ever became the first President.

Our freedom and liberty, our Civil Rights are doubtlessly indebted in the formulation and also the preservation of our Union to this day. There is no corporation or individual receiving the blessing under the United States of America's Constitution that should not question the defacing, demarking, or vandalism of the true principles as sound wisdom set therein as anything but attempts of grievous self-aggrandizement as Obama has set in the extreme case of nefarious insult to the American Citizenry.

Doubtless is the fact that those daring Obama's coat-tails place themselves in perilous providence in the undertaking of cover-ups of such magnitude as to arouse the scorn and merciless anger of a U.S. Populous that should make Egypt's debacle of Obama sponsored former President of Egypt-Morsi departure look a peaceful transition, where the very Angels of Heaven fear to tread but to arouse the anger of a loving and just God.

Cody Robert Judy
Please, help me by passing this along to your social media networks and contribute to this effort here if you consider these truths to be self evident.


Posted by Cody Robert Judy at 12:44 PM No comments: Links to this post