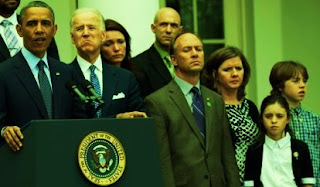 Obama visibly shaken by the defeat and abandoned support within Democrat party for his policies of anti-gun legislation mirrored today by Sen. Harry Reid as "anti-gun", lamented today in regard to the Universal Background Check legislation that pro gun lobbyist flat out lied about what was in this bill.

Obama insisted that a "minority" in the U.S. Senate blocked "common sense gun reforms" in the face of general support.

Check out the grimace of VP Joe Biden's if you want to know if Obama is visibly shaken?

Is it possible that Obama is more angry about someone else getting away with exactly what he got away with in the common sense directive for a natural born citizen to be required for the Office of the President? That he has lied about his eligibility, lied about being a natural born citizen, lied that he was "qualified for the Office" and insisted that everyone go along with his lie or face harsh penalties?

He says 90% of Americans support legislation that makes it harder for a "dangerous person to buy a gun", but isn't someone who usurps the Presidency, who isn't qualified for the Office of the President either by birth or by having two citizen parents at birth both of which are required by U.S. Supreme Court statute, a real dangerous person?

Isn't someone who would hand-out fraudulent long form birth certificates as credible identification, someone who lied about going under the alias of Barry Soetoro to the Illinois State Bar and thus had his law license revoked a pretty dangerous person?


What makes a dangerous person dangerous is the lengths at which they are willing to go to in order to cover up their own lies and when it comes to Obama we have an unparalleled national security threat and a very dangerous person who is using "Sandy Hook" victims parents of the slain to pass legislation that discourages further lawfully qualified people from getting involved with self-defense and active participation in gun ownership.

Obama says his legislation targeted "convicted felons, people convicted of domestic violence, and those with severe mental illness" A "narcissist" is someone who desperately needs other people to validate their own worth. It includes lying and delusions.

Isn't lying about who you are, about where you were born, using a false social security number, about the very identity documents state and federal agencies use to determine who someone is in the first place the definition of a pathological or congenital liar - a very dangerous person?

90% percent of Democrats voted for the legislation and the 10% of Democrats who didn't won't be invited to the White House for ice-cream. How does Obama think Sandy Hook could have been prevented when the assailant didn't subject himself to a background check and stole the guns? Why does Obama parade Sandy Hook victims around as if this legislation could have made the difference?

That is a lie and a falsehood itself. The only way you could possibly do that is by confiscating the guns of a whole family if but one of their members were mentally ill. That would dis-arm a majority of Americans and Obama isn't stupid he knows how to lie very well.

Obama you'll notice continually advocates "A Majority Rule" accept when it comes to himself. When it comes to himself, he wants a "Minority Rule". Now our Constitution advocates " A Supreme Law of the Land", we are a Constitution Republic, which means if the majority happens to be wrong, say in the case of a "mob rule mentality" which can happen very easily, that the Law can protect the minority from the majority.

Minority folks should take real notice here of Obama's avocation that the majority rule. It is all together evident here that Obama cares less for minorities then he portends.

“Instead of supporting this compromise, the gun lobby and its allies willfully lied about the bill…[they] claimed it would create a ‘big brother’ gun registry,” Obama said. He said the “pattern of spreading untruths” about the legislation served a purpose: to enrage a vocal minority of gun owners.

So what purpose did Obama's lie serve about his not being qualified for the Office of the President? To destroy the Constitution? To destroy the foundation of our society? To dis-credit the integrity of the very backbone of our Country?

He said the opponents of the amendment had “no coherent arguments” about why it should be harder for criminals and those with mental illness to buy a gun,yet clearly doesn't see his fraud and the forgery on his birth certificates as criminal or the result of deeply disturbed mental dis-order?

I mean what do you do with that? Its a complete break down of law and order and the very foundation of speech in being able to possible understand each other. We understand a natural born citizen is a greater requirement that is only insisted upon for the Office of President and Vice President because the power of the executive branch is not divided into 100 as it is for the U.S. Senate or 435 U.S Representatives in the U.S.House.

How in the world does the United States Supreme Court sleep at night when the argument has been placed before them in Judy v. Obama 12-5276? Documents filed in court found here for those interested.

If the media is going to take up arms about the Gun Lobby lying along side Obama, isn't it time that we start with the guy in the White House showing some integrity about who he really is, and admit he's not qualified for the Office according to the Constitution?

“All in all this was a pretty shameful day for Washington,” Obama said, “I see this as just round one,” he continued. I have news for Obama, Washington has not had a un-shameful day since he moved in the White House when it comes to integrity towards the Constitution; the law, they've all sworn oaths to.

If Obama continues to press his luck in advocating the demise of the Constitution he won't make the end of his second term before the American people catch on and just get fed-up with the lack of integrity.

Expanded back ground checks for gun owners is a national gun registration much more so than being born outside the United States and being a citizen of Jakarta, Indonesia and a British Subject as Obama is, makes you a United States Natural Born Citizen qualified for the Office of the President.

Posted by Cody Robert Judy at 5:13 PM No comments: 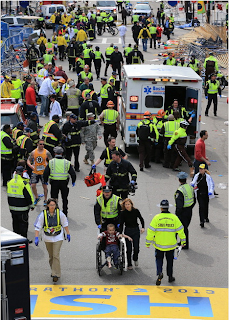 In a major press release going out to some 150 news outlets and political organizations ALL OVER THE COUNTRY the ominous character of the Boston Marathon twin bombings, as it is being related to which also invokes memories of the Twin Towers on 9-11, was related six days prior to its happening in the following blog post dated April 9th, 2013, but none responded.

Here was the POST APRIL 9TH
[Had a dream last night that I used my cell phone to call 911 twice on two separate, but related incidences, on a robbery and authorities would not respond. Left me with an ominous feeling and I thought this morning when I woke up that it was as bad as authorities not responding to Obama's fraudulent identification and non-natural born citizenship status. When the law fails us we are alone in times of trouble. When the people we have entrusted to enforce the law fail to do so, the law indeed has become corrupt. Its a bad feeling and a tragic societal suicide that comes in ObamaQuake. I just have a bad feeling we're headed for a pit of hell unparalleled in our Country.

It seems troublesome at best especially in the wake of this news about such gains with the Dow also touched a record intraday high at 14,716.46

In the past whenever I've dreamed of a cell phone its signified for me that I was pretty tuned in and receptive to what was about to happen. This accompanied with the two repeated 911 calls lets me know their is a BIG lesson headed (my) or our way perhaps the authorities haven't even seen coming?

You know I wouldn't wish it on anyone but I know when our Government aligns itself against the Constitution, somethings going to give and I don't think its going to be the Constitution that carries so much valiant blood with it.]


Of course the two related bombings have reminded all of us of 9-11. I specifically stated "two seperate, but related incidences" in relation to the 911 calls I had in my dream.

We also understand that gold plummeted losing $40 in a matter of minutes near 6% while the Dow dropped 155 points at 11:50 AM EST in direct and stark contrast to the April 9th report. Of course 1% of the total Dow as far as a loss could be considered a quiet robbery authorities didn't respond to.

For me this is a very close fulfillment of prophesy on what was "About to Happen" even as that specific was also related one week prior. Of course many details will be coming forth but it was very interesting to find out that an actual bombing drill coincided with the explosions.

If mother nature was in the same respect harmonized as with "authorities" conducting a "bombing drill" the exact same time in the exact same place as 2 real bombs are going off, then when we have the BIGGEST earthquake drill April 17th,2013 here in Utah, we should certainly expect a real Earthquake to happen... right?

If we look for "false" that is exactly what we will receive. If we look for "Truth" aren't we more likely to find it? So the choice becomes yours and what you want to receive.

I relate the following YouTube Video really as evidence of this Bombing Drill taking place at the exact same time that the mainstream media is not reporting thus far at all.


As I related also April 9th,2013, I wouldn't wish it on anyone. My greatest sympathies accompany the injured and dead of this horrific event. This loss is certainly being felt all over America in many related ways both directly and indirectly, but no where does it hit home more devastatingly then to those who have lost a loved one. This is heart wrenching.

Posted by Cody Robert Judy at 7:13 PM No comments: