OBAMA COULD LOSE TITLE of #POTUS -Story Behind the Story 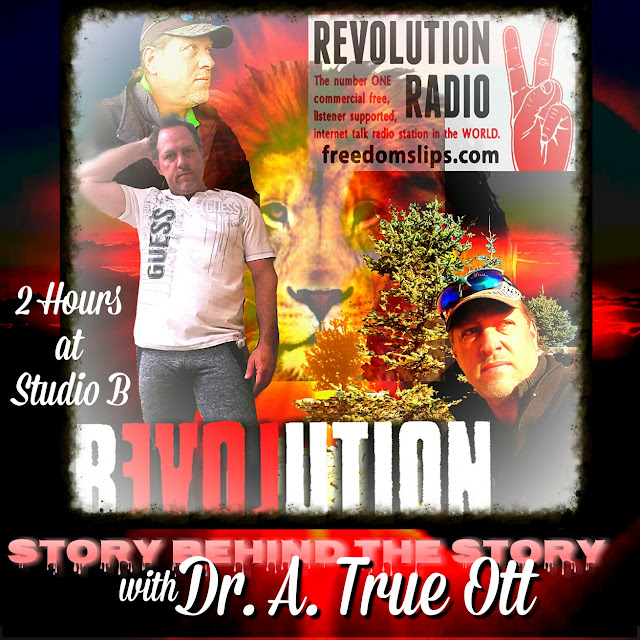 💥How OBAMA COULD LOSE TITLE of #POTUS
https://t.co/Dk9XWb2UwI 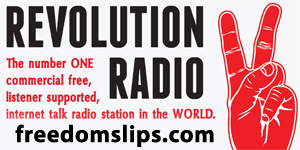 Posted by Cody Robert Judy at 5:00 PM No comments:

America May Be Called to Serve & Cleaned Up -CHINA - RUSSIA 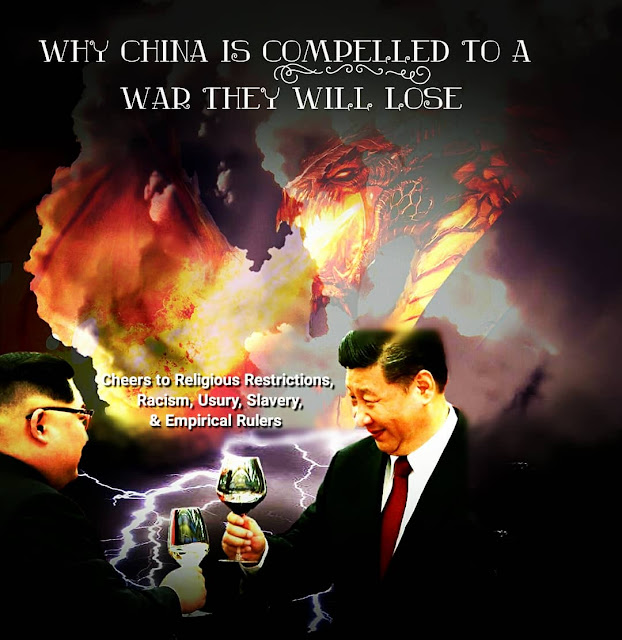 America May Be Called to Serve
& Cleaned Up
-CHINA - RUSSIA -

CHINA ACCUSES USA OF ARROGANCE in THE FACE OF EMPIRIORILISM- Emperor Tyranny , RACISM, and RELIGIOUS RESTRICTION.

Has God witnessed the Prayers of The People of Persecution with the compulsion of China to War? Will America set the People of China free? It may be a calling which advocates the greatest American Challenge in U.S. History!

[China will not hesitate with 'major response' to new tariffs: Ministry of Commerce

"We will immediately fight back with a major response," a Ministry of Commerce representative said during a Chinese-language briefing with reporters Friday in Beijing. "We have no other choice."

"We feel America is very arrogant. They have taken a wrong action. The result is that they will hurt themselves. If they release the list of $100 billion tariffs, China is prepared. And will not hesitate," he added.

"We have prepared with a bottom line mindset and have planned detailed action. We won't start a war, but if someone does, we will definitely fight back," the representative said." ]

http://theweek.com/articles/765276/how-china-win-trade-war-1-moveChina has a nuclear option.

These are elements like dysprosium, neodymium, gadolinium, and ytterbium. They aren't actually rare, but they do play crucial roles in everything from smart phones to electric car motors, hard drives, wind turbines, military radar, smart bombs, laser guidance, and more. They're also quite difficult to mine and process.

And it certainly wasn't prudent to allow China to corner the rare earth metal market. But ultimately China is just a hard-nosed global player, pursuing what it sees as its national interest.

But regardless, blaming the hippies for America's rare earth metal woes is doubling down on a bad strategy. Blinkered enthusiasm for free market solutions is how we lost domestic operations in the first place. Furthermore, China itself solved the environmental problem by just not caring, and created dystopian wastelands in the process.]

We may see with China's 6 Billion Dollar yearly Trade Surplus a resistance to level the field. It's been bullying for decades, and a bully rarely recognizes their own actions if such because if the positive incentives of the past rewards.

America's Choice of President Trump may have been the best choice for knowing what was happening matched with the courage and will to stop it by standing up to it.

There may indeed be a much bigger force at work than anyone realizes. God's hand in answering the People if China's Prayers as a Persecuted People in the Restrictions of Religeius worship.

As Christains cannot deny, the hand of God often opens his arms to a fold where many of his children are denied that they might receive the inheritance of Jesus Christ's Redemption and partake in the marvelous wonderful love He has Prepared for them!

Where Dictators and Policies of Tyranny and Racism exist the history of God has performed mighty works as the world noticed at just the right Time, Israel was suddenly and remarkably restored as a Nation!

We are urged to put on the armor of God and fight the good fight as free men. When silence is slavery and fighting and dying as free men entitle us to the Kingdom of God.

we must take up the burdens of our Lord as happy and joyfully as we know Freedom and Liberty is the Cause of our God in his Son Jesus Christ who is One with the Father even as Moses went after the Israelites to free them from Egypt as "Property" or Slaves of the State.

That a Choice may be brought to our Brothers and Sisters who are a Persecuted People the Lord God intends to set Free with Liberty and Individual Redemption!

So, is it any wonder these forces of Dictatorship are wailing, waxing, stomping and enraged as the Devil? No... no surprise at all. We may rest in the witness of God being laid out before them that they may say, "Your God is God!", and perhaps the pains of hell might release the grip of destruction upon them. 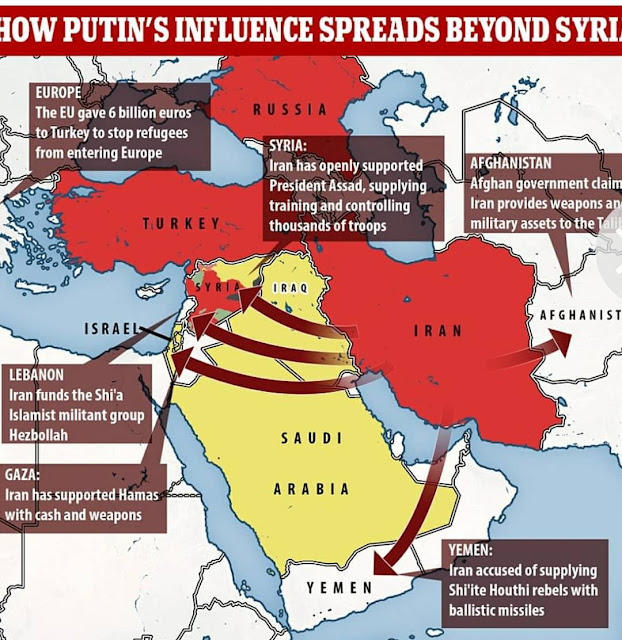 RUSSIA,  IRAN, TURKEY  SYRIA spark Alliance?
Is the Bear having Turkey for Syria? The surprise comes from Turkey listed on the NATO Alliance ( North American and European Allies) formed April 4th, 1949 after WWII.

[President Putin, President Erdogan and President Rouhani vowed to work together to create a 'lasting ceasefire', build a hospital for wounded civilians in Eastern Ghouta and allow refugees to return home.The leaders of Russia, Turkey and Iran met in Ankara for talks yesterday as they cemented their unlikely alliance over (Asadd's) Syria in a challenge to US and western influence in the region.]

And behold another beast, a second, like to a bear, and it raised up itself on one side, and it had three ribs in the mouth of it between the teeth of it: ...
Daniel 7:1-8

ON THE DOMESTIC FRONT

Things may be looking up as April Showers are forecast.

Still, the week of April 14-21 Has a history for the US of being one of the most painful months including but certainly noy limiyed to the Titanic Sinking, Bay Of Pigs, Assasination of President Lincoln,  Waco, Columbine, Missippi Overflowing, Virginia Tech and the Federal Building Bombing in Oklahoma. 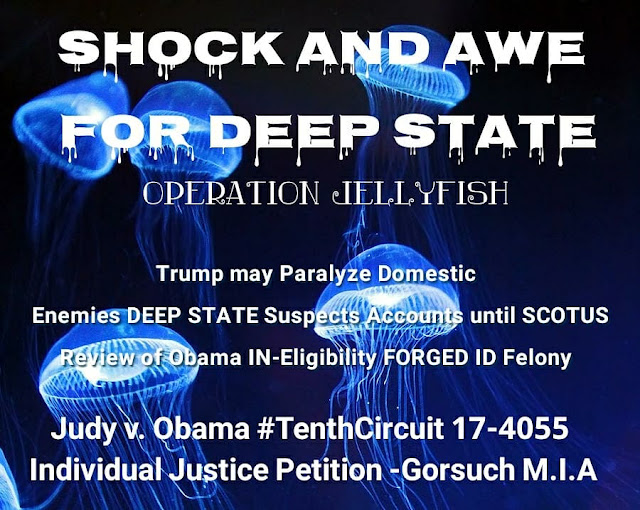 24 foreigners were just indicted by Mueller for their part in the Russian Collusion. The execution of such includes a freeze on foreign and domestic transactions of presumably personal and business banking accounts.

We may wonder if the Domestic Treason investigations may yield the same Hook.

Manafort and Page have now been history researched and alleged as [Plants] to the Trump Campaign.

And Utah Attorney Huber has been working since November with the authority of A.G. Jeff Sessions embarked on the discoveries for Uranium One and possible collusion with the Democrats to under mine the US National Security especially focused on the Clinton Campaign and her usurpation of the Office of Secretary of State alleged with a personal server used in context for a pay-to-play foreign favor private ambassy with Obama's Permission and use of it.

Posted by Cody Robert Judy at 10:16 AM No comments: