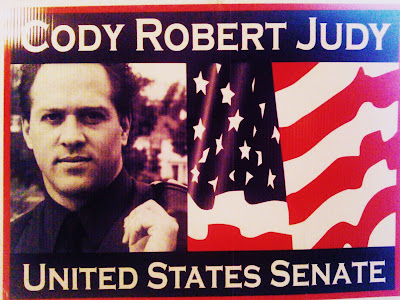 A startling and very troubling stand the media has taken in slanting the election choices of the public is very acutely seen in the latest pre-election poll.
While it’s true Mike Lee’s numbers are plummeting, the election question to voters in taking the poll is slanted without a fair choice of all the candidates asked in the question to those polled.

Mike Lee has dropped to 48% while Sam Granato is at 38% and Scott Bradley showing just 5%, with a 15% undecided factor, my name, Cody Judy, is not mentioned and this in the face of being registered as a candidate in the State of Utah’s Election office and on their web site.

The “Polling” people want credit for being accurate, but have failed the people, by asking the question in a slanted format. It’s easy to see, and is widely accepted as “media bias’ that is also accepted; but are the people served by this action? My considered thought is “No, The People are not served well, when the choices that are available are not shown in polls, not given fair media coverage, and not invited to debates.

I have to ask “The People”, wouldn’t you have liked to have seen all your choices in a debate when it comes to the U.S. Senate vacancy? Are you satisfied with the decisions that have been made for you by the Pollsters, by the Media who have spoon fed you the choices they felt were viable while the Utah State elections office represents something different and intended for your service and choices?

In past years the media has even done a little better job with doing at least a paper story in the Ogden Standard Examiner, or the Salt Lake Tribune of candidates who hoped they were ‘write”, meaning they were write-in candidates. This at least informed the casual paper reader of a broader choice.

This year has been the newspapers,television and radio stations most horrendously controlled political election yet. Controlled by those who were less then genuine about a concern for and a journalistic responsibility of letting the people know all of the choices available to them. The Sun Advocate in Price and the Salt Lake City Weekly, and the BYU Universe were the only papers that remotely covered my candidacy with so much as a reference of my web site that I am aware of.

This was not in the face of a quickly put together campaign, but one that has labored all year long with a web site, Radio Commercials that were featured in southern Utah as early as February and March against Senator Bennett, more YouTube commercials than any other candidate in the race, and a report that labored across the entire country in the defense of the U.S. Constitution as I traveled back to New York to testify about Obama’s ineligibility, which has to do with the Constitutional Crisis we are facing in America this very day with un-constitutionally signed bills that are being fraudulent fed to the public as policy. We have never faced such a crisis in America like this one we face today.

The way in which we face it will reasonably detail the cost we pay, it also stands to reason. This is my deep concern and regret in not being able to do more.

While Mike Lee, Sam Granato, and Scott Bradley have also no doubt put in hundreds if not thousands of hours throughout the year, I have also, but I have not been recognized as a qualified and legitimate choice by Utah’s big newspapers, or in debates or commentary by the major networks, and that is not because I didn’t challenge my opponents or extend an invitation for debate, which has gone unanswered.

This was in fact articulated to the public in Rolly & Wells feature actually telling The People of Utah of their desire to keep quite a campaign featured as a choice by the State' Elections Office saying " Then,as now, I believe that he deserved no attention from the press. Just because you declare yourself a political candidate, or a minister for that matter, doesn’t automatically make you newsworthy." Well, there is a lot more work then just declaring yourself as a candidate, and to that work they show no respect, nor any to society's decisions to forgive, nor our Constitutions' to allow me to run.

No tighter control of the public's choices, could be seen or stated in a controlled press as this one does, and I wrote them a letter about it, stating if they were going to make such statements they ought to have at least read my book, so they could make such from an intelligent perspective. I'm betting they didn't go out and get a copy of my book Taking A Stand- The Conservative Independent Voice.


While it is within a candidate’s right to refuse debate or contention within a race, I just don’t think the public is served very well, when the media as a public service engages in the same behavior. It’s simply the manifestation of poor journalism, biased networks, and certainly can be seen as a sickness of what we would call a free press, and in such a free America.

If the lack of debate has become so dis-interesting to the public and the use of lack of information used covertly as a champion to win is the main tool for politics, our future American Elections are indeed an endangered species.

While news papers holler that their readerships are down, the insidious journalism might be more of a problem to them then they care to take a closer look at. Harder times are virtually guaranteed with slop pouring out the press these days. While harder times are bemoaned by the citizen voter, he/she assures no relief with the sloppiness continually lapped up by these traditional sources that slight the choices available to the public.

The internet is a great tool that remains a new frontier fair and balanced, but even that is being jeopardized now by the Government, and most certainly to the degree that the older generations who consistently vote, threaten to use it.

So , as the last campaign message I’m able to publish to those who may hear or read this, I will not waste my breath by saying, I hope you write-in Cody Judy for U.S. Senate tomorrow and surprise them with more homework done at home than they expected you to do.