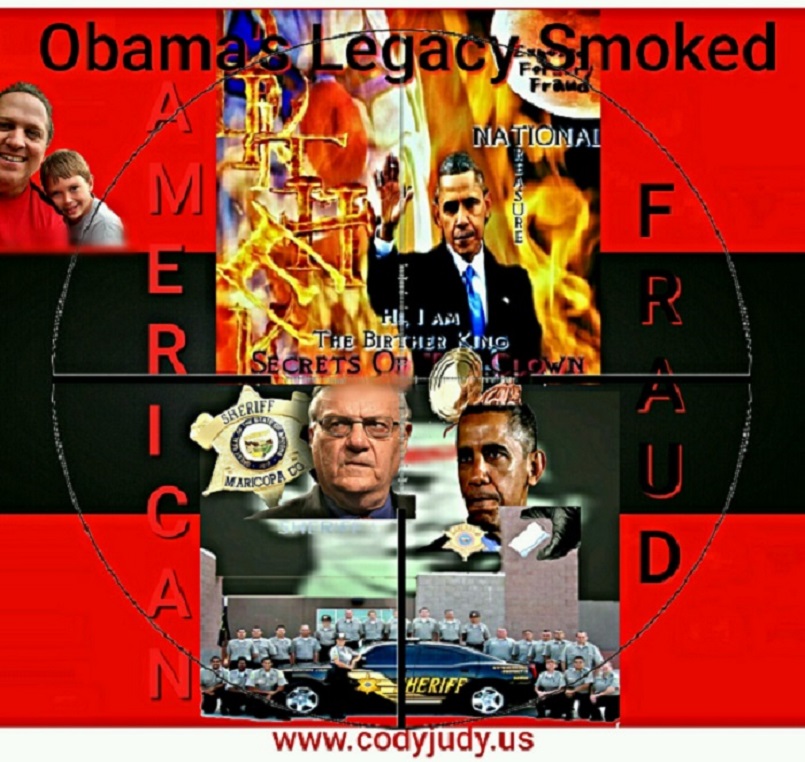 Mike Zullo lead investigator of Sheriff Joe Arpaio's Cold Case Posse, Maricopa County, Arizona, turned up the heat on Obama's Legacy of Fraud and may have just smoked the Secret Clown out of the Carnival Obama hailed when he released his fabricated long form birth certificate to the White House Press Core April 27th, 2011.

During the somber 70 Minute Press Conference LIVE STREAMed by FOX 10 NEWS Phoenix Arizona  ,seen in it's entirety below,  was a "9 Points of Forgery" Show Cased Video extrapolating Evidence confirming what multiple forensic examiners from different agencies concluded in findings; that an identification fraud of Obama's long form birth certificate was prominent as announced by lead investigator Mike Zullo.

There is no way Obama can take his hands off the red-heated plate of his long form birth certificate as they melded together with his handing it out to the White House Press core. The implications have far reaching consequences for Congress to consider with the falsification of identity and the reasons why such a crime would needs take place in the beginning?

Obama himself was well aware of the clamor for authentication of his being Constitutionally Qualified for the office of President during the three years from the time he occupied the White House in 2008 until the time of the release of the long form fabrication April 27th, 2012 assuring there would be Carnival Barkers in what now appears to be his Circus Act who were not convinced.

The general conclusion was that the Cold Case Posse had indeed figured out and obtained the base document the Obama Fabricated Long Form Birth Certificate had indeed come from! That in itself seems like a needle in the haystack but the evidence concludes the percentage of error on that conclusion is higher than 1000% (percent) confirmed by two very reputable forensic document examinations on two different continents that have excellent resumes of professional work. 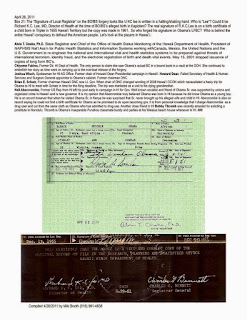 The Blog Post was entitled NATIONAL TREASURE 2 - I AM THE BIRTHER KING - SECRETS OF THE CLOWN. Mike Zullo in the Press Conference today did announce a couple of key things that when or if you read the June 4th Blog Piece you will see a contrast in. Mike Zullo specifically stated that Miki Booth was not a suspect in or of the forgery even though she had a close personal friendship relationship with Johanna Ah'Nee which she also acknowledges in her book Memoirs of a Community Organizer,  and Mr. Zullo specifically defended Miki Booth and stated he had interviewed johanna Ah'Nee twice in the investigation although he did not explain why or how Miki Booth as a friend of Ah'Nee's could be completely ruled out as a suspect. 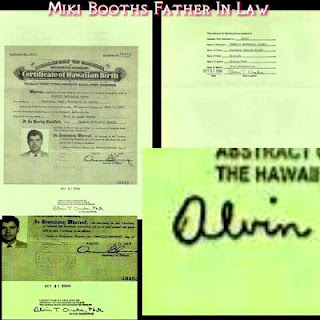 In my report on the Blog Post I noticed what seemed the odd or same "E", or what was termed a "smiley face" on the Miki Booth's father-in-law Francis Nathanel Booth's Birth Certificate she had published herself, that was [not] apparent on other Hawaii Birth Certificates Jerome Corsi had stated to be looking over in his investigations and collections as is shown below.

Zullo stated that there was indeed information he elaborated was indeed more classified that he could not release at this time and that would be passed on to 'other investigating organizations and Congress. 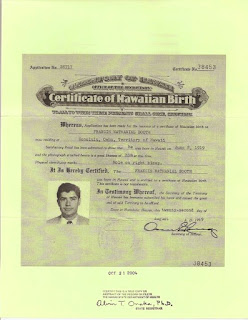 I will now also publically state for the record that I have never had a conversation with Mike Zullo.

Now moving on with the implications of the Cold Case Posse's revelations today, I am indeed obliged without any remunerations from this Cold Case Posse or the entire investigations investigative body as a Candidate for President of the United States 2008; 2012; and 2016 to affirm the positive report I delivered with standing to the appropriate Courts I have in not only defending the natural born Citizen requirement, but also informing, educating, and alerting the Justices of the highest Court of these findings. Beginning on Page 10 of the Response to the Motion to Dismiss in Georgia  and ending with SCOTUS 12-5276 & 14-9396

These facts relate to the General Public that a presidential Candidate with Standing was indeed alerting the Judicial Branch of Government NOTICE of crime that was now we know for sure being committed. The facts have simply gained momentum but the conclusions remain the same as they were related and reported March 1st, 2011. This indeed should implicate REVERSALS on the Courts own JUDGEMENTS upon the Court's own admission of TRUTH or TREACHERY?

Beginning in 2008 as a Candidate for President, (seen as the last entry on this Wiki Page), I filed a Civil Rights Law suit against Sen. John McCain and the RNC , that included Obama. 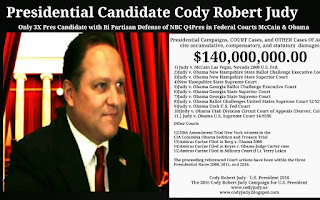 The nightmare of Obama begin with the leeway or head start the court granted Obama from the 2008 Cases I was involved with including a Amicus Curiae filed with SCOTUS in Berg v. Obama.

[ Emergency Motion ]
http://codyjudy.us/information/codyrobertjudyforpresident2012_029.htm
This covers questions about inheritance of father Kenya
[Through extensive investigation, learned that Obama was born in Mombasa, Kenya. Obama’s
biological father was a Kenyan citizen and Obama’s mother a U.S. citizen who was not old enough to register Obama’s birth in Hawaii as a “natural born” United States Citizen] 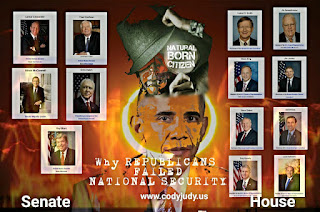 The Congress both the House Judiciary Committee and Senate Rules Committee was served NOTICE November 14th, 2016 to impeach the CONSTITUTIONALLY INELIGIBLE DEFACTO PRESIDENT that now impales dishonorably the Office of President in front of the entire world!

Americans now understand without a doubt that Barack Obama in obvious order to maintain the Office of President has incorporated the use of criminal enterprise and identity fabrication in his own identity documents. Congress must now assume the reasons were to cover up his own Achilles heel of Constitutional consideration for qualification or in other words, Usurpation of the Office of the United States President! 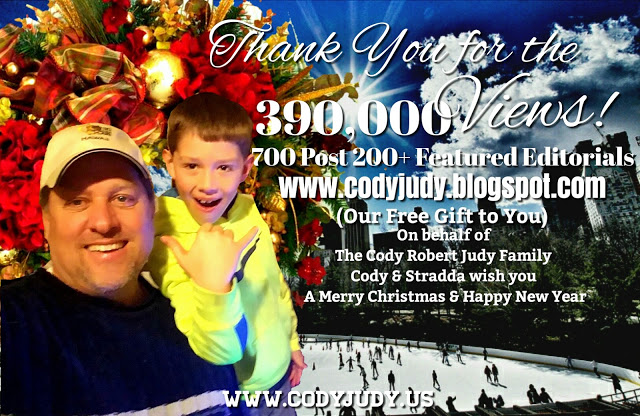