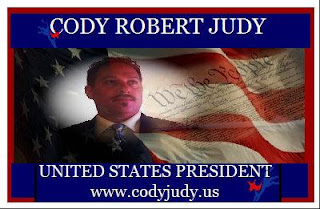 With the performance in the GOP Michigan Debate Gov. Rick Perry just showed America that career politicians can draw 'blanks', we didn't have to say a word.

Move over, move out, step aside Gov. Rick Perry, there's a new Democrat in Town with two pistol hot commercials.

While no one likes to draw blanks, it does show everyone that the job for President is not exclusive to a career politicians that would like you to "think" that they understand something "We The People" don't.

Here at the campaign for Cody Robert Judy we're fed up with our politicians actually being too smart for the Constitution and the oath they took to support it.


We gave them charge to protect and preserve our Supreme Law and they have ignored it, and in many cases been cowards in taking a stand for that which we charged them to watch over. The change we need?

Cody Robert for U.S. President- That message is the hope for Washington DC.

The Cody Robert Judy for President 2012 U.S.C. Eligibility Campaign presents: Faith, Family, and the Constitution. A 60 minute commercial for democrat caucuses and primaries premiering now for the early Democrat caucuses and primaries. This spotlights Cody's background and Constitutional work defending the Natural Born Citizen clause of our Contitution.

Hi, I’m Cody Robert Judy and I was born in Idaho Falls, Idaho, the son and grandson of wheat and barley farmers and we raised proudly, horse and cattle too.

You might say I lived a rich life by learning early that faith, and family meant happiness

A good part of preserving faith and family is making sure the opportunities are there for our children; we make sacrifices for freedom and liberty every day.

As a candidate for President of the United States I sued Sen. Barack Obama and Sen. McCain in 2008 for not being a natural born citizens required by our Constitution: Born in the United States to Citizen Parents.

I’m running for President again. From 1787 to 2012, nothing has changed in that requirement , yet many in power lack the courage to take a stand

I’m grateful for my relatives that died for our Constitution. Happy Veterans Day!
Faith, Family, and our Constitution- 3 good reasons I won’t forget, when you vote for me in the Democrat caucuses and primaries.

I’m Cody Robert Judy and I approve of this message.