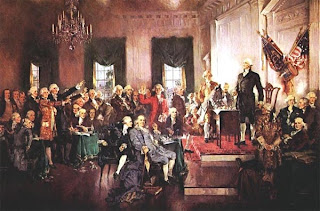 While I share the frustration of all Birthers as an Article II Patriot alluding to Col Sellin sentiments I offer: while the "means" may be correct, (Voting Republican will simply delay the inevitable), the "Ends" ( it is better to let Obama win and allow a flawed two party system to collapse) does not provide an answer worthy of our Constitution.


With a two party collapse all Americans are still left at the drawing board as to "Who" to trust in defense of the Constitution?

I have been a defender of the Constitution continually with Federal Action as a leader in the Birther Movement. Its important to note that in The Birther Movement our Economy and National Defense are included very prominently in the balance. By no exaggeration our Economy and our National Defense are compromised with the Republican Candidates. I share that sentiment.

What I do not share is the 'hopelessness' represented in a "none of the above vote" and the presumptive nominee of the Democrat Party as Obama. Not all Republicans are corrupted, not all Independents are corrupted, and not all Democrats are corrupted. In fact, I believe whole heartedly that it is a very small percentage that is actually at work in the corruption. I believe we do out number them and that is why we can win IF those who are Birthers will actively start supporting my candidacy.

Listen, people are looking at the "Presumptive Nominee" of the Democrat Party as Obama instead of realizing what and how 'caucuses' work in the Democrat Party. I believe that is a fundamental error in political strategy by every Birther who is not actively lining up to support my candidacy.

Caucuses are won and lost by a majority. If you care about this country it makes sense to sign up as a Democrat, and line up at the State Caucus to vote for me and bring your friends. To share this vision please consider:

1) Obama's camp thinks he's a shoe-in and are not actively recruiting grass roots democrats to come out and support him in a Caucus that will in fact take place. Let's take the Iowa Caucus for Democrats in Iowa. Democrats are coinciding their Caucus with the Republican Caucus Jan 3rd, 2012.

2) Imagine if you will the media significance of all the Republicans and Independents walking into a Democrat Caucus and pulling a rabbit out of their hat with a WIN against Obama by Cody Robert Judy? This is far more important politically than wading through a list of 8 Republican Candidates in Iowa whose winner on the Republican side may or may not be the nominee anyway.

a.) Obama's base is ROCKED with the loss and its broadcast by the entire MEDIA!

b.) Who beat Obama? Its doesn't matter who won in the GOP, we have a LOSS already in the Obama scorecard to report. Imagine the Media sensation! Where was this Iowa Caucus Winner standing on Obama's Eligibility? The Question is BLOWN UP like it was when Donald Trump popped up and Republican Candidates see a wave, rather than catching the wave, and reconsider their perspective.

3) Iowa has a Veterans population, they have a farmer population, their are Iowans who love the Constitution. Who among us, the Birther Movement, has influence in these populations? Many retired Generals, and Majors, and Lt. Col's have influence and could use it in a focused fight! Quit trying to beat Obama in a General Election, the Republicans are not going to do it, sweeping the Constitution under the carpet as Patriots? They have long forgotten the "Creator" in the Declaration of Independence and the "Lord" in the Constitution seen in the Year of our Lord. Do you think God's really proud of the Republican's strategy and he's going to get behind it?

Do you think as George Washington penned " Let us raise a standard to which the wise and honest can repair. The event is in the hand of God", is so far fetched from the Iowa Caucus, if every single Birther in the Nation focuses on moving hell backwards in the Democrat Iowa Caucus by voting for Cody Robert Judy?

I am Cody Robert Judy, I am in the fight against Obama by myself. I am calling on all birthers for their help. Will you my fellow Birthers, in a depressed and disparaged state of mind think so hopelessly as to give up in the fight when you are needed most, all because the Republican Candidates won't comment on Obama's Eligibility? You'd rather leave the fight entirely? That represents loyalty to Obama and the Republican Party Candidates who keep their mouth shut. Is that where you'd like your loyalty to stand?

Well, I may not be able to win, but by God your going to see me in a political fight and your going to watch me lose. I wouldn't want you to miss the show you'll witness with your hands in your pockets on a $20, $50, or $100 dollar bill that may have provided a commercial to move Iowan's, me standing against Obama. You'll all be able to watch the tank run over the lone man standing against the tank in Tiananmen Square. You'll watch, and you'll have that on your conscience and God's witness against you for your in action just as much as you believe the 'in action of the GOP Candidates is contemptible.

Live with that and remember, a few can stand against a Tyrant in the Democrat Iowa Caucus, just as the brave King Leonidas and 300 Spartans funneled the enemy through the focused hot gates in the battle of Thermopylae. They may have lost or died, but all of Greece took notice.